This Week in the NFL Betting News 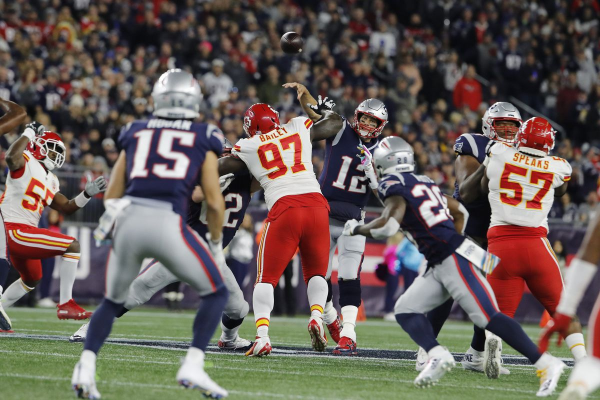 It was yet another week in the NFL that definitely wasn’t lacking in any drama or excitement. Let’s check out as many headlines as possible from Week 6 while looking ahead to Week 7.

The Kansas City Chiefs are undefeated no more. The fighting Pat Mahomes put up a heck of a fight Sunday night in New England but fell on a last-second field goal. However, being 5-1 with three of their next four games coming at home isn’t a bad position. The Los Angeles Rams, however, survived another week and are now 6-0. Sean McVay’s group braved the cold weather in Denver and came away with a 23-20 win. The way the schedule sets up, an 8-0 start is not out of the question.

Run Out of Town

The Tampa Bay Buccaneers have seen all they need to see from defensive coordinator Mike Smith, who was let go on Monday, one day after the Bucs lost 34-29 to the Falcons. The Bucs are statistically the worst defense in the NFL, giving up 34.6 points per game. They have lost three games in a row despite averaging 28 points per game on the season. In that sense, firing Smith was not unexpected. It’s also a sign that head coach Dirk Koetter knows that he’ll be next on the chopping block if he can’t get things turned around.

If you think you’re having a bad day, just imagine how Titans quarterback Marcus Mariota felt on Sunday while he was getting sacked by the Ravens 11 times. The Ravens won the game 21-0 while tying for the second-most sacks in a single game in NFL history. The Titans have now lost back-to-back games and scored 12 points or fewer in three of the last four weeks, as they have fallen to 30th overall in points per game.

The Buffalo Bills find themselves in a unique position quarterback-wise after Sunday’s loss to the Texans. Josh Allen was knocked out of the game with an elbow injury, forcing Nathan Peterman to replace him. Peterman threw an excellent touchdown to Zay Jones, with the Bills actually taking a lead under his leadership. However, with the game tied in the closing minutes and the Bills driving for the game-winning score, Peterman threw a pick-six. Allen is now described as week-to-week with damage to his ulnar collateral ligament, so he may or may not be available for this week’s game. If he can’t play, Buffalo will either have to go back to Peterman or insert veteran Derek Anderson, who the team recently signed.

Another quarterback whose status is week-to-week is Miami’s Ryan Tannehill. He was a late scratch on Sunday due to shoulder problems, forcing BrockOsweiler to get the start. Osweiler led the Dolphins to an overtime win over the Bears despite a goal-line fumble by Kenyan Drake. Head coach Adam Gase he isn’t sure when Tannehill will be good to go, as his shoulder issue seems to be rather unpredictable, so who starts this weekend against the Lions is anybody’s guess.

Steelers running back Le’Veon Bell is reportedly set to return during the team’s bye week, which happens to be this week, but that doesn’t appear to be the case just yet. Bell has reportedly had no contact with any team officials about his plans. That could change at any time, but it’s yet to happen. Steelers players are actually excused until Thursday, so he definitely won’t show up until then. It’s looking like next Monday is a possible date for Bell’s return.

On the heels of a four-game losing streak, Broncos GM John Elway said Monday the team will be “fighting for our lives” when they play the Arizona Cardinals on Thursday night. Some have interpreted that as saying that head coach Vance Joseph is currently fighting for his job, something Joseph agreed with when asked about Elway’s comments. The Broncos started 3-1 last season but proceeded to lose eight straight games. After a 2-0 starter this year, they are in danger of meeting a similar fate with four straight losses. A loss on Thursday and the Broncos will surely be spiraling out of control and firing Joseph would be more than justified.