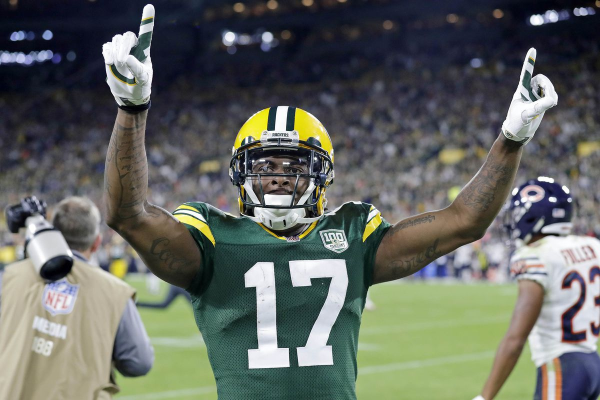 Sunday Night Football is going to be one of the best showings this season. The Green Bay Packers travel to Foxboro to take on the New England Patriots. The story in this one is whether or not the defenses are going to be able to stop the offenses. Aaron Rodgers and Tom Brady are two first-ballot Hall of Famers, and the defenses for both teams this year have struggled against the pass. This is going to be an epic matchup as the Patriots have all but clinched their playoff spot, and the Packers are still fighting for theirs. I think we will see a very high scoring game as both offenses will come out clicking. New England is favored to win by 5.5 points at home.

The Packers currently sit at 3-3-1 on the season and are second in the division, just a game back in the win column. With a win in this game, the Packers odds of making the playoffs would increase greatly. Rodgers has led the team thus far this year as he has thrown for 2,283 yards and 13 touchdowns. Rodgers has only thrown one interception on the year so far. Aaron Jones is the Packers leading rusher with 274 yards and two touchdowns on the year. Devante Adams has caught 52 passes for 690 yards and has found the end zone six times thus far this year. The Packers are coming off of a close loss to the Rams in which they fell 29-27 a week after beating the 49ers 33-30. The Packers are scoring 25.0 points a game while allowing 24.7 points a game to opposing teams. They gain 438.0 yards a game while giving up 362.3 yards a game. On defense, they excel at stopping the pass as they have only allowed 243.1 yards a game. This is going to be a game where the Packers might struggle to stop the pass as they haven’t faced a quarterback like Brady yet this year.

The Patriots got off to a rough start dropping two of their first three, but since then have been great. The Patriots sit at 6-2 and have won five in a row. They haven’t played too tough of a schedule except for the win against the Chiefs. Other than that, they have played the Bills, Dolphins, Colts, and Bears. Only one of those teams have a chance to make the playoffs this year. The Patriots are led by Brady, who has thrown 16 touchdowns this year against seven interceptions. Brady has thrown the ball for 2,200 yards and James White, a running back, is the leading receiver. White has caught 55 passes for 459 yards and six touchdowns. The leading rushers on the team is rookie Sony Michel who has rushed for four touchdowns and 422 yards. The Patriots only move the ball for 390.3 yards a contest but still score 29.9 points a game. Their defense is solid giving up just 394.5 yards per game. The Patriots have welcomed the addition of Josh Gordon, and he has helped them stretch the field.

This should be a knockout brawl between two top teams in the NFL. I look for Brady to come out firing and they will need to get on the board first. Both of these teams are mostly one-dimensional, so we can expect to see a ton of passing. The game looks like it will come down to the final quarter where the team with the ball last can expect to win. The Packers need this game, and I think Rodgers still has some magic. Take the Packers and the points.