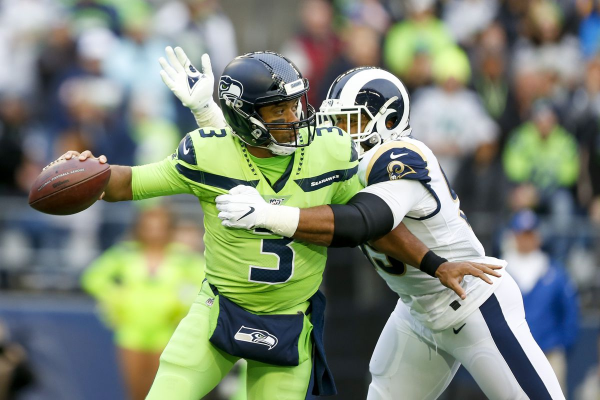 The Los Angeles Rams will be hosting the Seattle Seahawks this Sunday in their first of two divisional matchups this season. The Seahawks sit atop the NFC West with a record of 6-2; the Rams are not far behind at 5-3. The game will kick off on Sunday, November 15th, at 1:25 p.m. PST on FOX, there will be no fans allowed in attendance at the Rams’ new state-of-the-art SoFi Stadium due to Covid-19 protocols.

The Seahawks are coming off a severe 44-34 loss to the Buffalo Bills, who carved up their secondary; 386 of their 420 total yards came through the air. This has been the story of the year for Seattle as they have the league’s worst-ranked defense. The other side of the ball has been a completely different story; they have the league’s highest-scoring offense at 34.3 points per game.

Russell Wilson has led the way for Seattle’s offense, displaying MVP-caliber play more times than not throughout the season. He leads the league in passing touchdowns with 28 and has thrown for over 2500 yards with 8 interceptions. Running back Chris Carson has been excellent this season when healthy; on his 66 attempts, he has 323 yards and three touchdowns. He is a threat in the passing game, too; hauling in 22 catches for 147 yards and three more touchdowns.

The Seahawks have playmakers on defense, but they still have managed to give up a ton of yardage this season. All-pro linebacker Bobby Wagner has led the defense this season with 80 tackles and three sacks. Newly acquired defensive end Carlos Dunlap had a big first game as a Seahawk last week as well, bringing a much needed pass-rush presence. The Seahawks will need to tighten up their coverage if they want to turn things around.

The Rams are fresh off their bye week, coming into this game with the NFL’s sixth-ranked offense, averaging 396.4 yards and 24.1 points per game. Quarterback Jared Goff has been hit and miss this season; he has 2,145 yards passing, 13 touchdowns, and six interceptions. Running back Darrell Henderson Jr. has been great, averaging 4.8 yards per carry on his 95 attempts for 458 yards and three touchdowns.

Wide receivers Cooper Kupp and Robert Woods lead the Rams yet another year. Kupp has 48 catches for 527 yards and two touchdowns, while Woods has 37 catches for 436 yards and four touchdowns.

The Rams defense is led by Aaron Donald, the wrecking ball who wreaks havoc in the middle of the Rams defensive line; he has 26 tackles, 11 for loss, nine sacks, and three forced fumbles. Linebacker Micah Kiser leads the team in tackles with 59 and has a forced fumble. The Rams allow the second-fewest yards per game at 291.9.

Seattle will be without some key players in this matchup; starting center Ethan Pocic is out, giving backup Kyle Fuller his first career start. Starting cornerbacks, Shaquill Griffin and Quinton Dunbar are out, weakening what was already the worst pass defense in the NFL. Defensive tackle Bryan Mone has been ruled out as well. Runningbacks Chris Carson and Carlos Hyde, defensive ends Alton Robinson and Benson Mayowa, and linebacker K.J. Wright are other notable players listed as questionable.

No players are out for Los Angeles, linebackers Leonard Floyd and Terrell Lewis have been listed as questionable, along with offensive lineman Brian Allen.

Betting Predictions for Seahawks vs Rams

The play of the Seattle defense will decide this game; their offense has shown no signs of being unable to put up points, but they cannot depend on having to outscore their opponents in a shootout each week. If the Rams can attack the Seahawks secondary as the Bills had success doing last week, look for it to be a long day for Seattle. Their league-worst pass defense could allow Goff to have a massive day through the air, especially since both of their starting cornerbacks have been ruled out. The Rams will indeed have a strategic game plan prepared, as they’re coming off a bye week. This could mean trouble for the NFC West division leaders. Will Los Angeles be sitting atop the NFC West after this week?

Be sure to check out this NFC West showdown Sunday at 1:25 p.m. PST on FOX!