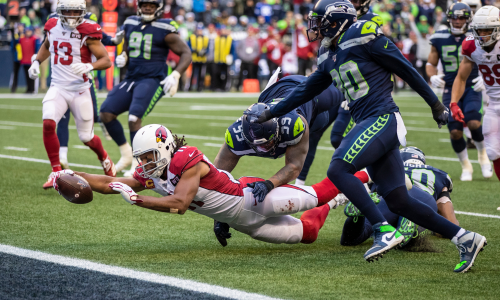 The undefeated Seattle Seahawks (5-0) will travel to Glendale this Sunday to take on the Arizona Cardinals (4-2) in an NFC West divisional showdown. Previously scheduled to air at 1 p.m. PST, the game has become the Sunday Night primetime matchup after Covid-related cancellations, and is now airing at 5:20 p.m. PST, on NBC. There will be a small number of fans in the crowd, as Arizona allows for 1,200 people to be present as long as they abide by the Covid-19 regulations.

Here are the betting odds, according to Draftkings.com

The Seahawks are amongst three remaining undefeated teams; with a record of 5-0, they sit atop the NFC West. Their quarterback, Russell Wilson, is must-see TV. He is making his case for the NFL’s Most Valuable Player award as of new, leading the Seahawks to the NFL’s first-ranked offense. He has thrown for 1,500 yards already, with 19 touchdowns and three interceptions.

Seattle has weapons all over the field, and second-year receiver D.K. Metcalf has already proven himself as being one of the most challenging receivers to match up against in the league. Pro Bowl receiver Tyler Lockett is also having another sure-handed year, remaining Wilson’s top pass-catcher. Their Pro Bowl running back Chris Carson hasn’t slowed down this season either. He is averaging 4.7 yards per carry with three rushing touchdowns, and has reeled in 21 catches out of the backfield, scoring three more touchdowns through the air.

Their defense, however, is another story, ranking last in the NFL in yards allowed per game (at 471) while giving up 27 points per game on average. They have a bend but don’t break mentality, giving up a ton through the air, though they have consistently stepped up in the red zone to halt drives.

Bobby Wagner remains the leader and heart of the Seattle defense. The 9-year veteran is looking to make his 5th straight First-Team All-Pro appearance, and is averaging more than ten tackles per game so far. Jamal Adams has been the Seahawks best pass-rusher this season, showing his versatility, but he has not played in weeks due to a groin injury. His absence could present the Seattle pass-rush problems as the Cardinals have the 3rd ranked pass-block win rate on their offensive line.

The Cardinals are looking to carry on with their momentum, coming off two blowout victories, winning 30-10 against the New York Jets in Week 5 and 38-10 against the Dallas Cowboys in Week 6.

Quarterback Kyler Murray could pose a threat to the Seahawks defense, prone to giving up huge yardage. His dual-threat capabilities will make Seattle have to respect him through the air and on the ground. The Seahawks have had trouble defending quarterbacks who can effectively scramble; Cam Newton had a massive day against Seattle when they matched up earlier this season. Murray has six rushing touchdowns already this year.

This game will be the first time the Seahawks have faced newly acquired Cardinals’ receiver DeAndre Hopkins. The Seahawks are currently giving up the most passing yards per game, so Hopkins could have an enormous day. He is one of the league’s best receivers. Running back Kenyan Drake has had a productive season thus far, averaging 4.6 yards per carry with four rushing touchdowns.

The Cardinals are ranked 12th in total defense, allowing 18.7 points per game and 346 yards per game total – 226 passing and 120 rushing. The NFL’s highest-paid safety, Budda Baker, leads them defensively, acting as a swiss army knife who can do it all. Arizona’s leading tacklers are linebackers Jordan Hicks and De’ Vondre Campbell; they will look to clog up the field and prevent Russell and the offense from getting rolling.

The Seahawks will most likely be without their star safety Jamal Adaml this weekend, as he has yet to practice this week. If Adams is unable to go, Ryan Neal will be starting for the third game in a row.

For the Cardinals, offensive lineman Kelvin Beachum, defensive back Dre Kirkpatrick, and receiver DeAndre Hopkins are listed as questionable but did participate in practice Friday. Defensive lineman Chandler Jones will be out for the rest of the season after surgery on his bicep.

Be sure to tune in for what will be a great matchup between two explosive offenses. Here, we like the over and a Seahawks win. Never bet against Russell Wilson in prime time.