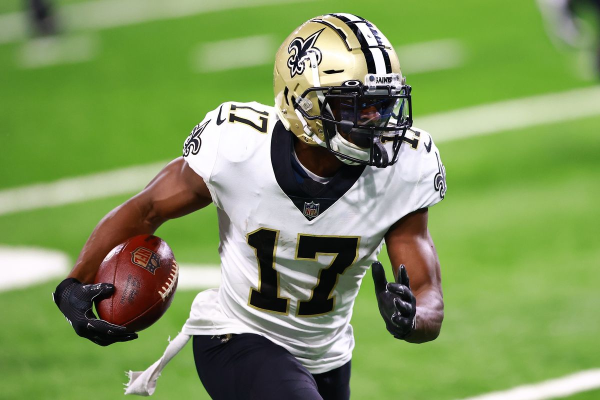 The New Orleans Saints and Carolina Panthers will meet for the first time this season with valuable positioning in the NFC South up for grabs.

The Saints (3-2) sit in second place behind Tampa Bay (4-2). Thanks to a three-game winning streak that was snapped last week, the Panthers (3-3) are not far behind.

With a victory, Carolina could really make things interesting after they were virtually written off before the season began.

Kickoff is set for 1 p.m. ET Sunday at the Superdome in New Orleans, La.

The Panthers closed as 1-point favorites against the Chicago Bears but struggled to keep up once the Bears took the lead with a touchdown less than four minutes into the game. Chicago eventually opened up a 20-6 lead late in the third quarter and finished with a 20-13 victory.

The Saints were on a bye last week. Their last game was a 30-27 come from behind overtime win over the Los Angeles Chargers on Oct. 12.

On Thursday afternoon, the Saints were 7.5-point favorites at DraftKings and FanDuel. That’s exactly the number both websites opened the game on Sunday.

Both web sites also listed the total at 51.

When two division foes face one another, it is a good idea to check out the trends since there is so much history. Doing so with this game shows some strong trends toward the underdog and the over.

Two other head-to-head trends favor Carolina, too. The Panthers are 15-5 ATS in the last 20 meetings in New Orleans, and they are 4-1 ATS in their last five meetings overall.

The Saints thought they might have a chance to get WR Michael Thomas back this week after he missed the first five games with an ankle sprain, but he appeared on Wednesday’s injury report with a hamstring injury.

New Orleans did get good news for its defense with the return of DE Marcus Davenport and CBs Marshon Lattimore after they were limited during their last game. Starting CB Janoris Jenkins missed several games with a shoulder injury, but he returned to full participation in practice on Wednesday.

Carolina also expects to get back one of its starting cornerbacks, as Eli Apple (hamstring) returned to full practice participation on Wednesday.

Typically, a team has an advantage coming off a bye week, but that does not seem to be the case lately with New Orleans.

Last season, the Saints were 14-point favorites against Atlanta and lost the game on the field by 17 points. The year before that, they had averaged 36 points per game before the bye and mustered 24 points in a non-cover win over Baltimore after the bye. They also had a bye in the first round of the playoffs and failed to cover in their divisional round win over Philadelphia.

In other news, don’t overreact to the Panthers’ loss to Chicago last week. The Bears have a pretty good defense and often make it difficult on opposing quarterbacks. That was certainly the case for Carolina’s Teddy Bridgewater as he never got much going.

New Orleans’ defense does not present nearly as difficult a challenge for Bridgewater, who might also be motivated to play well in front of his former teammates. The Saints have allowed 30 points per game. It’s difficult to cover more than seven points when you’re giving up that many.

There are too many key trends favoring Carolina to ignore, especially if you can get the hook. So place that bet while it remains at +7.5.

The Saints likely will be a popular teaser pick, but because of all the positive trends for Carolina, it would be better to tease the Panthers up to 13.5. It would not be a surprise to see the Saints win the game, but there might be a much higher level of comfort if you take the Panthers’ side of the teaser instead of the Saints’ side.