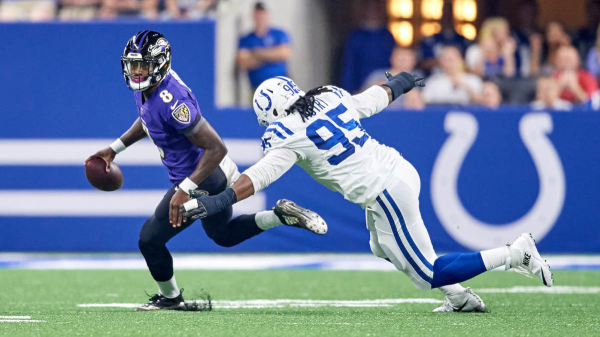 Baltimore travels to Lucas Oil Stadium this Sunday to face the Indianapolis Colts, (formerly the Baltimore Colts.) Both teams are in the playoff hunt in the AFC and are looking to improve on their 5-2 record. This isn’t a must win game since seven teams are now viable for the playoffs because of new league rules, but every win matters. Especially for the Ravens who are looking to avoid three straight losses.

Consider this a “get right” game for the Ravens, as they have had issues over the past few weeks. Injuries are surmounting. Turnovers continue to be a problem. And with no genuine star on the receiving corps, things are looking dicey for a pre-season favorite to win the Super Bowl.

Now let’s look at some key stats and best bets.

The reigning MVP of the league hasn’t performed up to the level many had hoped for. His turnovers have been a cause for concern. Lamar has a career high 2.1 percent turnover ratio entering Sunday’s contest. In last week’s game against the Steelers, Jackson had four turnovers with one being a pick six on the Ravens first drive.

His mechanics are sloppy throwing off his back foot more than usual. He relies on his athleticism too much and lacks accuracy. Sidearm throws have become more the norm than usual, with errant throws becoming the result.

To make matters worse for Jackson, he’s facing another stout defense prone to getting to the quarterback often and fast.

If Lamar can cut down on turnovers, and revert to his record setting ways of 2019, the Ravens stand a much better chance to win this game. That’s a big if, though.

Both teams enter week nine with top defenses. The Colts currently rank in the top tier in most defensive categories that matter. First against opposing QB’s, holding them to league low 76.2% rating. First in the league in points allowed, holding opponents to just 15 per game. And 3rd in takeaways. This is a key stat, since the Ravens are having trouble holding on to the ball.

On the flip side, Baltimore has a tough defense ranking 5th in the league overall. They have the best run defense, and 5th best pass defense.

This is essentially a pick em according to DraftKings. This wasn’t the case at the beginning of the week. Indy started as a 5 point dog. Betting trends heavily favored the Colts by Friday evening, making them a 1 point favorite.

Betting has also favored the over. On Tuesday the O/U was at 44.5 points. If you got locked in there, you’re in good shape. I don’t like the 48 points it’s set at now.

Baltimore has suffered a few major injuries in the last week. All Pro left guard, Ronnie Stanley left week 8’s game against the Steelers with a severe ankle injury and is out for the season. This coming right after extending his contract for five more years.

Star cornerback, Marlon Humphrey was placed on the IR, Reserve–COVID-19 list on Monday. This has a trickle down effect that has depleted the depth chart for the Ravens defense. Several players, including Humphries backups, have been placed on the IR Reserve COVID-19 list for being in close contact.

Losing two standouts at important positions will be a hill for the Ravens to overcome. Baltimore is known for their “next man up” mentality and has one of the league’s deepest rosters. Hopefully, this won’t take too much of a toll on a team looking to stay in playoff contention.

Indy fares much better on the injury front. The most notable is RB Marlon Mack, who’s been placed on IR at the start of the season with an Achilles injury. Not to worry, rookie RB Jonathan Taylor has filled this role with some decent showings and looks to be an improvement over Mack.

If you can, avoid the spread in this game. It’s way too close to call. If you must, take the Ravens money line at +100.

What I do like about this game is the prop bets.

DraftKings has Jonathan Taylor at 50.5 rushing yards. Taylor is averaging a meager 3.9 yds per carry. He only sees an average of 13 touches per game and has yet to face a defense like the Ravens. I like the under on this bet.

Another player prop I like is the under on Phillip Rivers passing yards. Set at 259.5, Rivers has only thrown for more than this in three games this season. And like Taylor, he has yet to face a formidable defense in doing so.