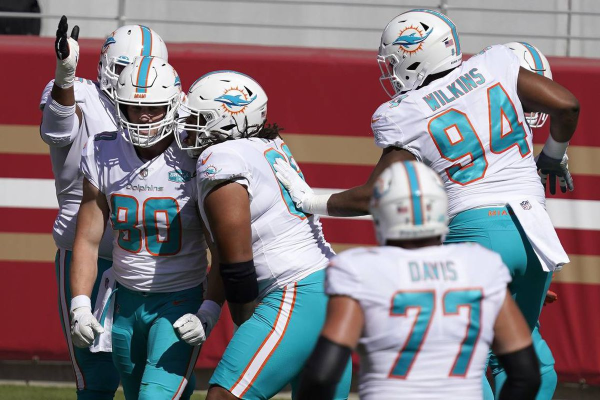 The Rams travel to the East Coast on Sunday to face off with the Miami Dolphins at the Hard Rock Stadium. The Rams go into Sunday’s match on the back of a 24-10 win against the Bears and will be aiming to go 2nd in the NFC West. The Dolphins are coming into Sunday on the back of a 24-0 walloping of the hapless jets and will fancy their chances against their NFC opposition. Who will extend their winning streak? See our Rams vs Dolphins betting odds, analysis, and best picks.

Going into Sunday, the Rams are held favorite at -215 with the Dolphins +185 being underdogs according to the DraftKings. A $215 wager for the Rams would give you a $100 return, while a $100 wager on the Dolphins would yield $185.

The Rams are having solid outings

The Rams go into Sunday’s clash with the Dolphins as marginal favorites. They are 5-2 for the season and come into Sunday’s match as 24-10 winners in their latest outing against the Bears.

Wins are a crucial thing in the NFL, and the Rams have been racking them up recently. While the quality of opponents the Rams have faced and beaten are mostly from the lowly NFC East, these wins have been crucial to their momentum.

Tougher opponents in the Buffalo Bills and Philadelphia 49ers have thrashed them recently, and it remains to be seen whether they can overcome an opponent with a 0.5 record in the Dolphins.

Part of the Rams’ incredible start to the season has been their offense. Jared Goff, their starting QB is having a terrific season and is throwing full of confidence. He has thrown for 1789 yards (12th in the NFL) and 12 touchdowns for the season at a completion percentage of 69.7%.

There has also been a resurgence in offensive production elsewhere in the Rams offensive ranks. The trio of Henderson Jr, Brown, and Akers has combined for 799 rushing yards and six touchdowns for the season. The Rams rank 8th in rushing yards and should be a constant thorn in the Dolphins defense on Sunday.

Defensively, Aaron Donald continues his defensive dominance guarding the Rams lines. He has eight sacks for the season (2nd in the NHL) and will surely be a handful for the Dolphins offense, especially rookie starting quarterback Tua Tagovailoa.

The Dolphins will be fielding a rookie QB.

The Dolphins are coming off a victory against the New York Jets and will be fancying their chances against the Rams at home on Sunday. The Dolphins won their last two games emphatically, 43-17 against the 49ers and 24-0 against the Jets. They will be seeking to build on these wins and extend their winning streak to three.

In game week 8, the Dolphins will be betting on Tua Tagovailoa, their rookie QB to deliver the goods. This choice of QB is coming despite Ryan Fitzpatrick providing better than expected cover in this position in the past few games. For the season, Ryan has been throwing for 1535 yards and ten touchdowns while giving out seven picks.

The Dolphins seem to have great faith in Tua’s ability and have had him well-rested going into Sunday’s game. Tua was picked fifth in the draft and that is to mean something. He might be what the Dolphins need to put together some good run of results.

On the defensive side, the Dolphins are not faring as badly. They rank in the top 20 on both rushing and passing defense and are third in points allowed per game (18.8 points). They are also the first team this season to record a shutout victory despite the scoring frenzy being witnessed in the opening season fixtures.

I fancy the Dolphins to grind out a win.

Sunday’s game will feature two equally matched sides. The Miami Dolphins are playing with confidence under coach Flores, and the Rams have also had several solid outings this season. Still, neither of these two teams have faced strong opposition to bolster their credentials as a team to beat. This game will boil down to how well conditioned the teams will be on Sunday, and I see the Dolphins running out with it. The Dolphins are coming from an extended rest, and the Rams will have to travel to the East Coast for the early kickoff. Tua will also be seeking to send out a message with his first NFL start. If he is offered the right protection, something I am confident the Dolphins will do, he should pick runners at ease and guide the Dolphins to a close victory.