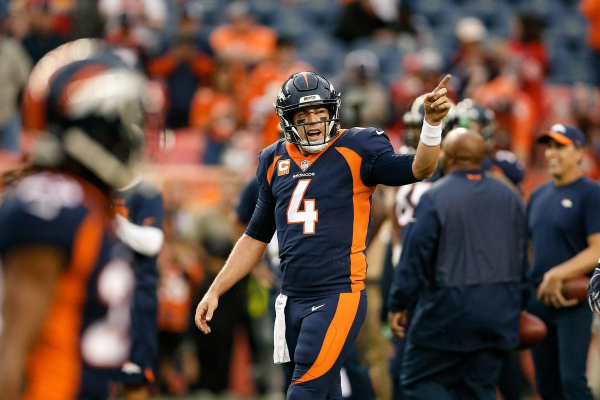 To say that the Pittsburgh Steelers are good on the road might be a bit of an understatement. They are 4-0-1 on the road this season and are 15-1-1 in their last 17 games. The Steelers (7-2-1) will look to continue this road domination when they travel to Sports Authority Field at Mile High to take on the Denver Broncos (4-6) Sunday afternoon. For the Steelers, they are coming off a 20-16 win at Jacksonville, one that saw them come back from a 16-point deficit to ultimately win.

The Broncos are coming off of their own impressive win as they downed the Los Angeles Chargers 23-22 to snap a 2-game losing skid. While the record leaves something to be desired, the Broncos have a knack for playing in some tight games. 7 of their games this season have been decided by 7 points or less, with 5 of those games being decided by 3 or fewer points. The two will battle it out on Sunday with a kickoff scheduled for 4:25 pm ET.

The point spread comes in with the Pittsburgh Steelers being 3-point favorites on the road. The over/under on total points scored is set at 47.5 points.

Offensively, the Pittsburgh Steelers rank 5th in the NFL, gaining 410.2 total yards of offense per game while the Broncos rank 11th, gaining 371.9 yards. The Steelers have done a much better job of converting their yards into points, though, as they are 4th in the NFL averaging 29.9 points per game. The Broncos fall to 19th in average points per game with 22.8.

At 7-2-1, the Steelers sit atop the AFC North. A large part of their success has come from an unlikely hero in James Conner. Expected to be the backup to Le’Veon Bell before the season, Conner has made the fact that Bell refused to show up to the team an afterthought. On the season, Conner has 796 yards rushing and 10 touchdowns on 173 carries. He has also added 45 receptions, 411 yards, and a touchdown through the air. With his presence, it has given quarterback Ben Roethlisberger a viable weapon out of the backfield.

Speaking of Roethlisberger, he has thrown for 3,202 yards, 23 touchdowns, and 10 interceptions this season. His leading receivers to date are JuJu Smith-Schuster (64 catches, 866 yards, 3 touchdowns) and Antonio Brown (62 catches, 807 yards, 11 touchdowns).

Broncos Looking For Second Win In A Row

To have a chance on Sunday, the Broncos are going to need a good effort from their defense to stop the high-scoring attack of the Steelers. The leaders on the defensive unit include Todd Davis (51 tackles), Von Miller (10 sacks), Bradley Chubb (9 sacks) and both Justin Simmons and Chris Harris (2 interceptions apiece).

On the offensive side, the Broncos will rely on Case Keenum to guide the offense from under center. On the season, Keenum has 2,605 yards, 11 touchdowns, and 10 interceptions. He has also been sacked 24 times. The leading receiver for Keenum this season has been Emmanuel Sanders. Sanders has 763 yards receiving and 3 touchdowns on the season.

Not even looking at their superb road record, I really like the Steelers in this one. On the offensive side, they have so many weapons that can burn you, from Pro-Bowler Antonio Brown as well as JuJu Schuster-Smith in the air to future Pro-Bowler James Conner on the ground, they can be tough to beat. While the Steelers defense is not elite, the Broncos offense is just a little one-dimensional, as the passing game has struggled throughout the season. I could see the Broncos keeping it close early on, but I expect the Steelers to eventually pull away from them. Take the Steelers -3.