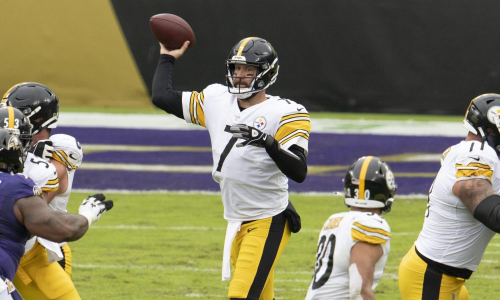 The Steelers enter the game as the only undefeated team left in the NFL and riding the momentum of a big 28-24 win over the Baltimore Ravens. Down 17-7 at halftime, the Steelers turned an early Lamar Jackson INT into a TD and outscored the Ravens 21-7 in the second half. All in all, Pittsburgh forced 4 Baltimore Turnovers and was able to escape with a huge division win. QB Ben Roethlisberger went 21-32 for 182 yards and two touchdowns while RB James Connor added a score on the ground. Baltimore outgained the Steelers 457-221 over the game and looked like they would win it late, but a potential game-winning pass from Lamar Jackson fell incomplete as time expired. WR Juju Smith-Schuster leads the Steelers in receiving yards with 67 yards on seven catches, as he finally saw more targets.

The Cowboys are a certified dumpster fire right now. They come into this game after a disappointing 23-9 loss to division rival Philadelphia on Sunday Night. Dallas outgained the Eagles 265-222 and forced four turnovers, but were held scoreless in the 2nd half and were 4-16 on 3rd down conversions. Rookie QB Ben DiNucci was 21-40 for 180 yards and was sacked four times. Ezekiel Elliot only had 63 yards rushing, and Dallas’s woes continued on offense since the injury to QB Dak Prescott. The defense played well, as they held the opposition to under 30 points for just the 3rd time all season. But a scoop and score by the Eagles late in the 4th quarter as Dallas was driving were enough to do them in, and they lost their third straight game.

In the Cowboys three full games without Dak Prescott, they have scored 10 points, 3 points, and 9 points. Their offense is not the same without Prescott, and the offensive line has struggled to stay healthy. In Prescott’s five starts, the Cowboys were averaging 32.6 PPG and an astonishing 488 total yards of offense. Since that time, though, they are averaging 7.3 PPG and just 250 yards per game. No one has been hurt more than RB Ezekiel Elliot, who has seen his rushing yards per game plummet in Dak’s absence. A lot of this is due to teams not respecting whoever is playing QB for the Cowboys and stacking the box. Dallas has also gone seven straight games with a turnover, a trend that should continue versus a Steelers team that has the 2nd most INT in the league. HC Mike McCarthy has not named a starter for the Cowboys as of Thursday but has said it will be either Cooper Rush or Garrett Gilbert. Between them, they have thrown nine pass attempts in the NFL and completed three passes for 42 yards. Yuck.

The Steelers are the real deal. They average 30.1 PPG (5th in NFL) and allow just 20.3 PPG (6th in NFL). The defense currently ranks in the top ten in the following categories: total yards allowed, pass yards allowed, interceptions, rushing yards, rushing touchdowns. Pittsburgh is stacked with talent on the defensive side of the ball, and they will have a field day vs. a struggling Cowboys offense. On the offensive side, Big Ben has plenty of weapons to spread it around. WRs Chase Claypool (23 catches, 375 yards, five touchdowns), Dionte Johnson (25 catches, 233 yards, three touchdowns), and Juju Smith-Schuster (39 catches, 346 yards, 3three touchdowns) are all viable options and should have big days vs. the Dallas secondary. RB James Connor is on pace for a 1000 yard season and should get close to double-digit rushing touchdowns as well. Roethlisberger has 15 touchdowns on the year with just four interceptions and has done a pretty good job of protecting the football. A strong defense, offensive weapons, a good run game, and a solid veteran QB are generally a good formula in the NFL, and Pittsburgh has certainly shown that.

Currently, DraftKings lists the Steelers (-14.5) as the favorite, with the total set at 42. Vegas is seeing this as a 28-14 game in favor of Pittsburgh. Generally, I try to stay away from two touchdown spreads as the NFL is a week-to-week league, and you never really know what will happen. For this game, I’d recommend a teaser. Bump the Steelers to -10, take the total up to 50 and take the under. No way Dallas puts up more than 17, and I would expect Pittsburgh to be in a position to rest some starters in the 2nd half.

In terms of player props, I love James Conner over 79.5 rushing yards in this game. He has eclipsed that mark four times so far this season, but in each of those games, he had at least 15 attempts. This is going to be a game where Pittsburgh can let Conner do the bulk of the work and not rely on Ben to carry them. Look for Conner to go way over this number. Because of that, the other number I like is Conner over 19.5 rush attempts. I’m looking for a 22-26 carry game for Conner with somewhere in the neighborhood of 100 rush yards.

In conclusion, here are the three picks I like:

After extending their hot and San Diego’s cold streak, the Seattle Mariners will be looking to leave Petco Park with a two-game sweep as they take on the Padres this afternoon. Yesterday, the Mariners pounded out a dozen hits and plated eight runs, and Chris Flexen pitched 6.2 shutout innings to collect his third straight END_OF_DOCUMENT_TOKEN_TO_BE_REPLACED