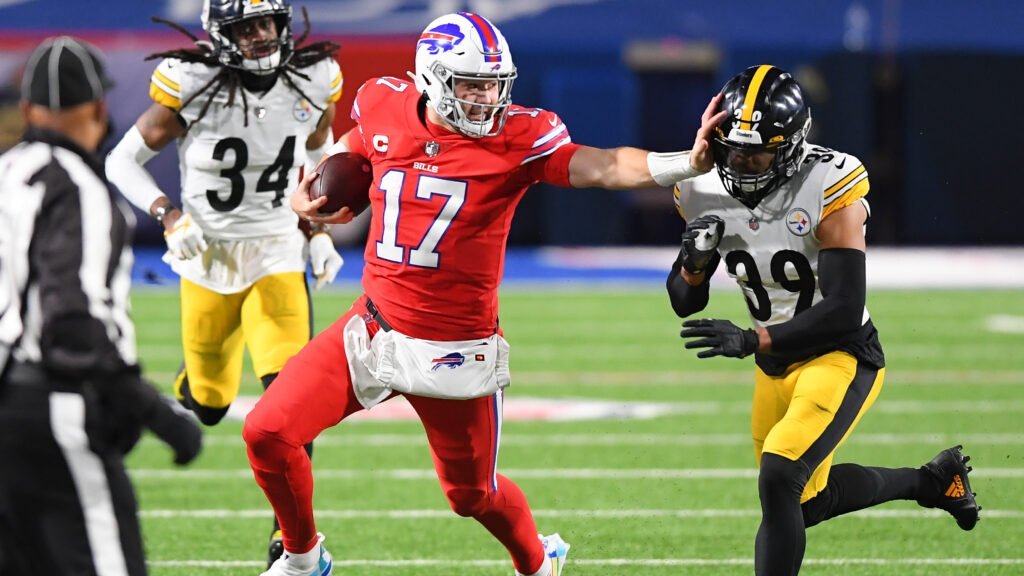 This is definitely a nice game to start Sunday with, two teams that were in the playoffs a year ago and definitely look good enough to get back there this season. The Bills have especially high expectations. In preseason NFL betting odds, the only AFC team with better AFC title and Super Bowl LVI odds is the Kansas City Chiefs.

The story for the Steelers is all about improving the offense and balancing it for better success when they need it the most – in the playoffs. The fact that star linebacker T.J. Watt is now the NFL’s highest-paid defensive player is a headline too.

After winning the AFC East and reaching the AFC Championship Game last season, the Bills went all-in on quarterback Josh Allen, singing him to a six-year, $258 million extension. It was the smart play and there are lots of reasons the Bill can be even better this season.

Pittsburgh Steelers vs Buffalo Bills odds are via FanDuel Sportsbook as of Sunday, September 12, 2021 at 3:00 a.m. ET. Want to see betting odds from several top online sportsbooks for the day’s other NFL matchups? Check out our NFL odds.

Everything seems to be in place for the Steelers to have another strong regular season after winning their first 11 games last year. With the addition of rookie RB Najee Harris, they are hoping to be more balanced on offense. The question is whether they will stick to that plan. Last year they were the worst rushing team in football, and the attack they had did not pair well with one of the best defenses in the league.

Pittsburgh’s defense is all about putting pressure on the QB. Watt led the league with 15 sacks last season and is a proven terror. I do worry that the loss of linebacker Bud Dupree will be felt, however.

C’Mon Bills, Don’t Let Us Down

There are two camps of NFL watchers. Those who think the Bills were a one-year wonder and will sink back to “Bills” status this season. And those who think Josh Allen is going to be a Hall of Fame talent that will lead the team to a long run of success. I am firmly in the latter camp and see no reason he can’t once again lead a strong Buffalo offense. His weapons look as good or better than they were a year ago.

I am also excited about Buffalo’s defense. Injuries hurt them for a chunk of last season, but they were also missing their best interior defensive lineman, DT Star Lotulelei, due to COVID. He is back and joined by some highly drafted pass rushers, on what should be a much better defense. Last year they were 16th in points allowed. If that jumps into the top ten, this group is going to be very difficult to beat.

These teams met last season with the Bills winning 26-15. I am looking for a similar result on Sunday. Buffalo’s offense was clicking early last season, scoring 27+ points in their first four games. I expect the same this season as everyone should be very comfortable, especially Allen.

The Steelers are going to have a hard time keeping up even with a defense that will be among the better units in the league by the end of the year. Pittsburgh's need to show off their shiny new toy (Harris) will make them easier to defend as the Bills build a lead.

Harris is a powerful runner and is going to get his chances when the Steelers are in the red zone. They want him to be the guy and that creates opportunities. I also think his receiving skills are underrated, so he is going to be on the field a lot. Pittsburgh might be playing catchup, but they are going to score some points on Sunday. I think the rookie has a nice debut.

The 2022 French Open is underway at Stade Roland Garros in Paris, France, and we are already almost through the first week of play. Tomorrow, the remaining third-round matches will take place, after which the men’s and women’s singles draws will be down to their final 16 contenders. In both men’s and women’s singles, there END_OF_DOCUMENT_TOKEN_TO_BE_REPLACED