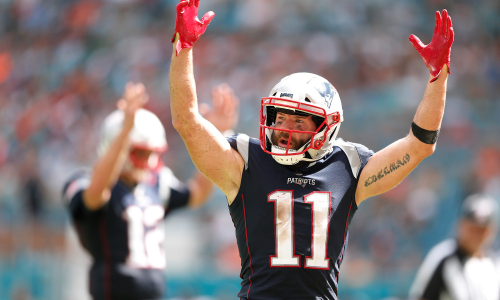 Former MVP Cam Newton debuted last week and looked a lot like his old self, rushing for 75 yards and two scores and throwing the ball efficiently for 155 yards with no turnovers. That led to a double digit win at home over the Miami Dolphins as the Pats also turned in a stellar defensive performance, intercepting Ryan Fitzpatrick 3 times.

The challenge this week is MUCH different, as they hit the road to face Russell Wilson and the Seattle Seahawks. The Hawks offense was in mid-season form in Atlanta, winning 38-25.

The key for the Pats in this game will be how they package their running game. If they can move the sticks it keeps Wilson off the field, which is always a good thing for an opponent. Bill Belichick even stated this week that Wilson might be one of the most underrated players in the league.

He’s right. The Pats had 6 players rush for at least 20 yards in their game against Miami, which helped them control the clock and the game. However, Seattle was on point with their run defense last week, bottling up Todd Gurley and the Falcons. Last year, Seattle gave up the 11th most rushing yards in the league, so they’ll need to prove last week wasn’t an outlier.

With Seattle being a more difficult environment, even without fans, Newton is likely to go through a feeling out period early in this game. Take the Pats prop to go UNDER 20.5 total points for the game at -127.

Wilson presents a completely different challenge for the New England defense. Week 2 is always filled with overreaction to what happened week 1, so there’s an opportunity baked into the numbers. The Dolphins couldn’t move the ball against New England, but the Seahawks will score in this game. They are fully healthy with Chris Carson, Tyler Lockett, DK Metcalf and company all ready to roll. That gives Wilson multiple ways to beat an opponent.

I’m over here telling you Wilson is going to score, you have recent visions of Cam looking like his old self, and the Seahawks game in Atlanta probably helped you win a fantasy game or two last week because the offenses were crushing the defenses. A total of 63 points were scored in the game. So, the OVER 45 is going to be speaking to you.

As mentioned, New England is going to try to control the clock. There will be fewer possessions in this game than what the Hawks experienced last week. It may take a deep breath and some guts, but the UNDER 45 is the play here. I think the Seahawks get a lead early, putting Newton in the uncomfortable spot of playing from behind.

Game Prediction: Which Mobile QB do you like best?

Newton and Wilson are both magicians. But we need more than one strong performance against the Dolphins before we’re ready to say the new look Pats are ready for a challenge like this.

Last week, the Seahawks showed no signs of having no OTA’s and no preseason games. They were hummin’ right away. That gives them the lead early in this game, which takes Belichick out of a comfort zone. And if Newton and his running game are up to the challenge of staying close through the first 3 quarters, there’s no doubt which signal caller I’d rather have for a 4th quarter drive.

In addition to taking the UNDER 45, lay the 4 points in this game. I have a feeling Pete Carroll’s gum chewing jaws will be on overdrive in the 2nd half Sunday night.

After extending their hot and San Diego’s cold streak, the Seattle Mariners will be looking to leave Petco Park with a two-game sweep as they take on the Padres this afternoon. Yesterday, the Mariners pounded out a dozen hits and plated eight runs, and Chris Flexen pitched 6.2 shutout innings to collect his third straight END_OF_DOCUMENT_TOKEN_TO_BE_REPLACED