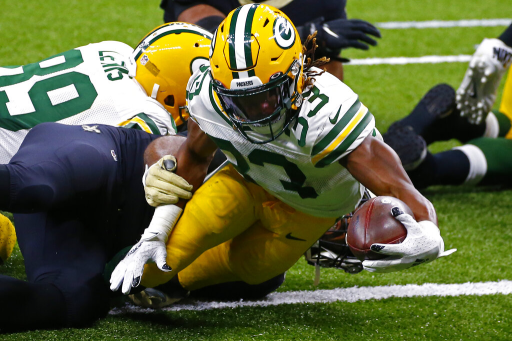 The Green Bay Packers and Houston Texans are both coming off losses, so they will be looking to bounce back when they square off this weekend. The Packers will try to keep up with the Chicago Bears near the top of the NFC North, while the Texans will try to climb out of the cellar in the AFC South under interim head coach Romeo Crennel.

Kickoff is set for 1 p.m. ET Sunday at NRG Stadium in Houston, Texas.

Green Bay appeared to be well on its way to a big win over Tampa Bay before Aaron Rodgers’ first interception of the season got returned for a touchdown in the second quarter. The Buccaneers rolled to a 38-10 victory after closing as 2-point underdogs.

Though they closed as 4-point underdogs, the Texans were in a great position to beat the streaking Tennessee Titans straight up after they scored a touchdown to take a 36-29 lead with just two minutes to go. Houston tried to put the game away by going for a two-point conversion but missed. The Titans rallied to force overtime, and then scored on their first drive in overtime to win by six points.

Green Bay is favored by 3.5 points at DraftKings and FanDuel as of Thursday afternoon.

Both websites list the total at 57, which is up from the opener of 55.5 on FanDuel and 56 on DraftKings.

The over looks good based on a few trends, too. The over is 5-1 in the Texans’ last six games as an underdog, and the over is 10-2 in the Packers’ last 12 road games against a team with a losing home record.

The Packers’ initial injury report on Wednesday did not look good. Of the 13 players who were listed, eight are regular starters. That includes three players – left tackle David Bakhtiari (chest), safety Darnell Savage (quad), tight end Robert Tonyan (ankle) – who did not practice on Wednesday.

It’s really simple with this game. Do you want to be with or against Aaron Rodgers when he’s trying to make up for a bad performance?

Through the Packers’ first four games, Rodgers showed he is still one of the best QBs in the world. He threw 13 touchdown passes and zero interceptions while the Packers racked up an average of 38 points per game.

Last week, Tampa Bay’s stout defense made a couple of big plays and ultimately shut down Rodgers after the first quarter. Well, the Texans’ defense is nothing like the Buccaneers’ defense. Houston has given up 30.3 points per game.

On top of that, Houston is coming off an emotional game against the Tennessee Titans. The Texans scored a touchdown to take a seven-point lead with less than two minutes to go but failed on a two-point try that would have put the game out of reach. Instead, Tennessee forced overtime and then won in the extra session.

A loss like that to a divisional rival is difficult to bounce back from, especially when the beleaguered defense has to prepare for Rodgers.

The Packers’ 3.5-point line does not seem like a sure thing. It would be easier to suggest a bet if that line drops to -3. Instead, take a look at the Packers’ team total, which is 30.5 points at DraftKings and FanDuel, and take the over.