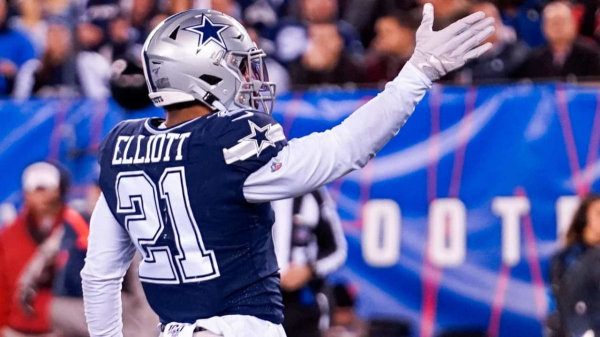 Sunday Night Football this week features a matchup of the NFC North versus the NFC East when the Minnesota Vikings (6-3) travel to AT&T Stadium to take on the Dallas Cowboys (5-3). The Cowboys currently hold the advantage in the NFC East but have the Eagles breathing down their necks at 5-4, though Dallas did win the initial matchup between the two.

The Vikings currently sit in second in the NFC North, as the Packers lead with a 7-2 record. Regardless, as we move into the second half of the season, a win for both squads could go a long way towards playing in the postseason. Kickoff for this one is scheduled for 8:20 pm ET.

Minnesota had been rolling before last week, winning four in a row before losing 26-23 to the Kansas City Chiefs. Not only did they lose the football game, but they also lost star wide receiver Adam Thielen, who reinjured his hamstring. Still, with the likes of Dalvin Cook and Stefon Diggs, they still have the ability to put up points in a hurry.

Dallas comes into this one having won two in a row. After beating the Philadelphia Eagles 37-10 a few weeks ago, they beat the New York Giants 37-18 on Monday night. They certainly have momentum in their favor and will look to keep it going against a tough Minnesota squad.

The Dallas Cowboys come into this as three-point favorites playing at home. The over/under for points scored is set at just 48.5 points.

On the defensive side, these are two of the best teams in the league. Minnesota currently ranks fourth overall in scoring defense, allowing just 17.6 points per game to opponents (20.6 on the road). Dallas is right behind them at fifth overall, allowing 17.8 points per game (16.8 at home).

Minnesota Hopes To Bounce Back

After losing to the Chiefs last week, it doesn’t get much easier for the Vikings as they have to hit the road for Dallas. To win this one, the offense is going to have to perform, and they will look to Kirk Cousins to have a solid game under center. On the season, Cousins is 174 for 253 for 2,217 yards, 16 touchdowns and just three interceptions. Thus far, he has been sacked 16 times.

For Cousins, he will be without Thielen but still has a couple of interesting options. Diggs currently leads the team with 38 catches for 710 yards and four touchdowns. Cook is also a big asset in the passing game, catching 33 passes for 338 yards.

Cook is also lighting the league on fire from the running back position, rushing 177 times for a league-best 894 yards and nine touchdowns. Certainly, the Cowboys will likely aim to contain him in this one, meaning that Cousins will need to take advantage of the opportunity and be effective in the passing game.

Like the Vikings, the Cowboys have the ability to beat you through the air and on the ground. Through the air, they rely on their highly touted quarterback Dak Prescott, who is 190 for 273 for 2,380 yards, 15 touchdowns and eight interceptions this season. Thus far, he has been sacked just 10 times, though he can also beat you with his feet, as he has 27 rushes for 175 yards and three touchdowns.

Leading the way on the ground, though, is Ezekiel Elliott, who has 158 carries for 741 yards and six touchdowns. He also has 24 catches from the backfield for 176 yards.

Cowboys Win And Cover At Home

This is a tough matchup to call because both teams play pretty solid defense, and both have offenses that are capable of putting up points. Throw on top of that the fact this matchup features two of the more dynamic running backs in the league in Cook and Elliott, and this has all the ingredients to be a solid Sunday Night game.

With that in mind, there are still a couple of trends that I look to. First, the Cowboys are 8-1 straight up in their last nine home games, meaning they protect their home turf pretty well. Possibly more importantly, Cousins has not fared particularly well in the past when it comes to prime-time games. In his career, he is 2-6-1 against the spread when playing prime-time games. For my money, I am taking Dallas despite laying the three points in this one.