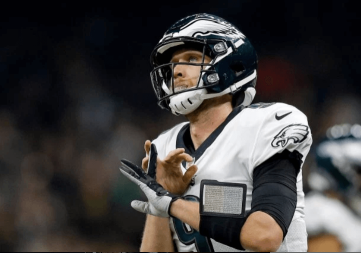 The NFL Combine is getting a lot of attention, but there’s a lot going around the league that doesn’t involve this year’s rookie class. Let’s check out the top stories in the NFL from the past week.

The biggest news of the week is that quarterback Nick Foles is reportedly set to sign with the Jacksonville Jaguars. The Eagles announced last week that they won’t be using the franchise tag on him, leaving Foles free to sign with any team. The Jags appear to be a good fit, as they are prepared to move on from Blake Bortles. Despite a disastrous 2018 season, Jacksonville still has one of the more talented defenses in the league and a strong rushing attack when Leonard Fournette is healthy. If those two things hold true, both Foles and the Jaguars should be in a position to succeed in 2019.

While the Jaguars appear to be getting Foles, they are reportedly looking to pawn off Carlos Hyde and Malik Jackson on the rest of the league. Both players appear to be on the trade block. The Jags only picked up Carlos Hyde last season in a trade with the Browns when they needed an extra running back. He wasn’t particularly impressive during his time in Jacksonville. Meanwhile, Jackson hasn’t quite lived up to the massive six-year deal he signed in 2016. If they can’t work out a trade, the Jags could end up releasing Jackson to help save some money.

The Arizona Cardinals made waves at the combine when GM Steve Keim told reporters that Josh Rosen is “our guy,” only to add the words “for now.” Such phrasing leaves the door slightly ajar for the Cardinals to pursue a new quarterback for new head coach Kliff Kingsbury. It’s possible that Keim is just trying to generate interest in the first overall pick. But it’s also possible the Cardinals will mull drafting a quarterback with that pick, most notably Heisman winner Kyler Murray.

For roughly two years, there’s been speculation about when the Eli Manning era would end in New York, but that day hasn’t arrived yet. Giants coach Pat Shurmur noted last week that he “fully expects” Manning to be in New York this year. The Giants are likely to take a quarterback in this year’s draft, but at the moment, it seems like Manning will stay with the Giants for at least another year until they move on from the two-time Super Bowl winner.

There are rumblings that the Oakland Raiders are using the Combine to shop quarterback Derek Carr around the league. It doesn’t seem like they are serious just yet, but if the Raiders think there’s a market for Carr, they may be more likely to take a serious run at signing Foles or another quarterback in free agency. They could also look to draft a quarterback if one falls to them with the 4th overall pick.

The Story That Won’t Go Away

The drama surrounding Rams running back Todd Gurley and his lack of productivity in the playoffs continues. Reports surfaced over the weekend that claim Gurley has arthritis in his left knee, the same knee in which he tore his ACL during his final college season. There are a few different ways to treat arthritis, although the Rams have said that Gurley won’t have surgery this offseason. Of course, something needs to be done because Gurley clearly wasn’t anywhere close to his best for the NFC Championship Game and Super Bowl.

Unfortunately, there were some NFL players getting themselves in trouble off the field this week. Here’s what you need to know:

The Ravens waived running back Alex Collins after he was arrested following a car crash last week. Police found both marijuana and a handgun in the car, prompting the Ravens to cut ties with Collins a few hours later.

Demaryius Thomas turned himself in last week and is facing felony charges of vehicular assault following a car crash last month. On February 16, Thomas was driving twice the speed limit in downtown Denver when his SUV flipped, seriously injuring one of his two passengers. The crash came just a few days after Thomas was released by the Texans.

Cowboys defensive tackle David Irving has received an indefinite suspension for violating the league’s substance abuse policy. Irving previously served four-game suspensions in both 2017 and 2018 because of substance abuse and personal conduct violations.