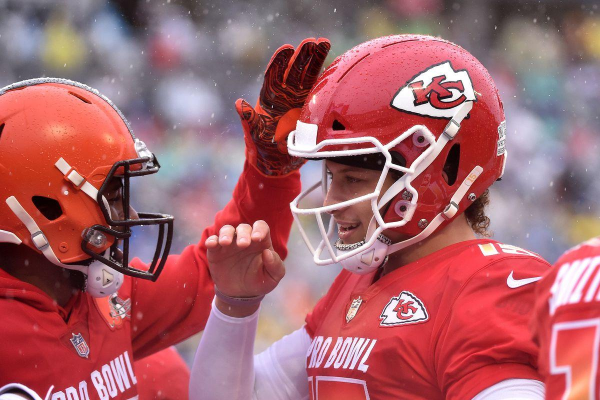 The Pro Bowl is behind us and Super Bowl week is finally upon us. Let’s check out all of the top stories concerning the Patriots and Rams, as well as the rest of the NFL.

Speaking of the Pro Bowl, the AFC dominated Sunday’s exhibition game on their way to a 26-7 win. In a rather odd game, the AFC got 92 yards receiving from fullback Anthony Sherman, as well as a late touchdown catch from defensive back Jalen Ramsey. It was Ramsey and the AFC defense who shined most of all, keeping the NFC to just 148 total yards on a dreary, rainy day in Orlando. Patrick Mahomes was named offensive MVP while Jamal Adams took home those honors on the defensive side.

As the Rams count down the days until they play in the Super Bowl, the controversial play that helped get them there remains at the forefront of the conversation. Cornerback Nickell Robey-Coleman was fined over $26,000 for his helmet-to-helmet hit on Tommylee Lewis that was not called for pass interference or helmet-to-helmet contact. After the game, Robey-Coleman admitted he should have been flagged for pass interference after seeing a replay. However, the cornerback has since changed his tune and is claiming the pass was tipped, which means pass interference could not be called. Of course, that would have no impact on whether or not the hit on Lewis was helmet-to-helmet.

The NFL has not made a formal statement about the missed call involving Robey-Coleman and Lewis. However, Adam Schefter did report that several NFL officials, including Commissioner Roger Goodell, contacted Saints coach Sean Payton and admitted that the officials made the wrong decision by not calling pass interference. Saints owner Gayle Benson also spoke with Goodell, although after he released a statement criticizing the NFL and the officials.

One of the biggest plot lines heading into the Super Bowl is the health of Rams running back Todd Gurley. After getting just five touches in the NFC Championship Game, it’s hard not to think that Gurley isn’t 100% healthy, especially after he missed time late in the regular season due to a knee injury. However, Gurley was adamant late last week that he’s healthy and good to go this Sunday. He insists that if there was a problem with his knee, he’d be on the injury report. Head coach Sean McVay has said he will do a better job of getting Gurley touches against the Patriots. One way or another, Gurley figures to be one of the key players in Sunday’s game.

In some non-Super Bowl news, placekicker Adam Vinatieri is signing up for one more year in the league. The 46-year old has agreed to a one-year deal to return to the Colts. Vinatieri missed both a PAT and a short field goal in Indy’s playoff loss to the Chiefs. However, that game won’t be his last in the NFL, as he will come back to kick for the Colts in 2019.

While the Bears fell a little short of the Super Bowl, they wasted no time in their offseason re-signing offensive tackle Bobby Massie before he became a free agent in March. Massie has spent the last three seasons in Chicago, starting 46 games, including all 17 this season. He will now spend the next four seasons with the Bears, helping to anchor their offensive line.

We’ll close on a rather troubling note involving Lions linebacker Trevor Bates. On Saturday night, Bates reportedly refused to pay $32 to a New York taxi driver. When he was arrested and brought to a police station, he allegedly punched a police officer. According to his agent, Bates was taken to a local hospital for a mental health evaluation where he remains for the time being.