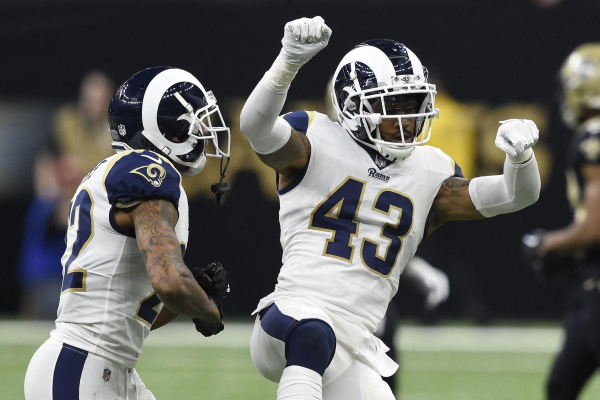 So it begins, the long, two-week wait until the Super Bowl. In the meantime, there is plenty of news from all around the league to catch up on, so let’s get to it.

In case you haven’t heard, Super Bowl 53 will be played between the New England Patriots and the Los Angeles Rams. For the Patriots, this will be their third straight Super Bowl appearance and fourth in the last five years. Meanwhile, the Rams haven’t been to the Super Bowl since the 2001 season when they called St. Louis home and lost to the Patriots 20-17. Early betting odds have the Patriots favored by 1.5 points.

Both conference championship games had plenty of controversial calls, but a no-call on an obvious pass-interference late in the Saints-Rams game will have people talking for years to come. Nickell Robey-Coleman, who hit Saints receiver Tommylee Lewis without any thought of playing the ball, even admitted after the game that it should have been called pass interference. He said he had been beaten and was just trying to save the touchdown. If the penalty had been called, it would have been highly likely for New Orleans to get the game-winning score before the game went to overtime.

As a result of the missed call that decided the NFC Championship Game, the NFL has pledged to discuss whether or not to make pass-interference penalties reviewable this offseason. Several coaches, including New Orleans coach Sean Payton, have supported such a measure in the past, so there could be enough momentum heading into the offseason to make a change.

Do Better Next Time

Few Rams had reason to apologize for their performance in the NFC Championship Game, but that’s exactly what running back Todd Gurley did. For whatever reason, Gurley had just four carries and one catch for 13 total yards against the Saints while backup C.J. Anderson got far more touches. Gurley missed time late in the season but insists that he’s not hurt, only saying “I was sorry as hell today.” Sean McVay also indicated that Gurley is healthy and implied that he will try to get him more touches in the Super Bowl.

One More Ride (At Least)

Sunday’s loss to the Rams was no doubt a crushing blow for 40-year old Drew Brees, but he made it clear after the game that he isn’t done yet. “I plan on being here next year and making another run at it,” said Brees, while acknowledging that he’s “not getting any younger.” Despite his age, Brees had one of the best seasons of his career. He also has one year left on his contract, so while he looks like he has plenty left in the tank, it’s also possible that next year is his last.

Despite being released by the Chiefs after a horrifying and unacceptable video of him striking a woman was released, Kareem Hunt’s NFL may not be over. According to reports, several teams have expressed interest in signing Hunt, although the Bears are the only team to publicly state their interest. Keep in mind that Chicago head coach Matt Nagy was Hunt’s offensive coordinator with the Chiefs in 2017. However, the NFL will surely suspend Hunt, meaning that if he does play in 2019, he probably won’t be playing in Week 1.

The King of Charm City

After much speculation, the Baltimore Ravens have agreed to an extension with head coach John Harbaugh. The exact terms of the deal have not been released, although it’s believed to be a long-term extension for the coach who helped the Ravens turn things around and win the NFC North in 2018 after a three-year playoff drought. There were previous reports of Harbaugh perhaps being traded to one of the eight teams with a coaching vacancy. However, with the NFL coaching carousel all but complete this offseason, Harbaugh appears to be staying in Baltimore for the long run.

One storyline to watch closely this offseason involves the Jaguars and running back Leonard Fournette. The team is using his suspension for fighting with Buffalo’s Shaq Lawson as a reason to void the guaranteed money left on his rookie contract. Fournette has officially challenged that decision with the NFL. An arbitrator will decide later this offseason whether the Jaguars will be able to legally justify such a move based on Fournette’s contract. In the meantime, Fournette has met with the team to discuss the situation and his disappointing season. After the meeting, head coach Doug Marrone said he believed Fournette was “in a really good place.”