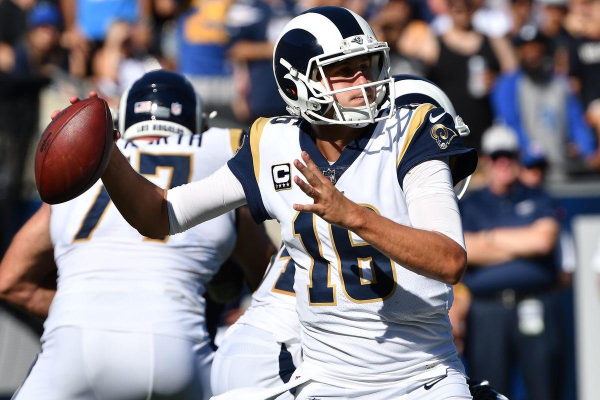 One of the best games on the week 10 NFL schedule features a pair of NFC West teams taking the field in Los Angeles. The Rams will host division rival Seattle Seahawks in a game of two potential NFC playoff teams. The Seahawks will be looking for revenge in this game after the Rams went into Seattle and beat them by a score of 33-31 earlier this season.

Los Angeles leads the NFC West division and continues to have the best record in the NFC at 8-1. The Rams have outscored their opponents by 99 points this season entering this matchup against the Seahawks. Seattle brings a 4-4 record into this contest, and are in the hunt for a Wild Card spot in the NFC. The Seahawks have rebounded after losing their first two games of the season. Los Angeles is a 9.5 point favorite over the Seattle Seahawks in this game.

Look For Seattle To Run

The Seattle Seahawks will likely try to establish their running game early and often in this one. Seattle was able to rush for 190 yards in their first matchup with the Rams this season, which was a season high for them. Running back Chris Carson is listed as questionable for this matchup, and the Seahawks will miss his 4.5 yards per carry if he is not able to go. Seattle will need to win the time of possession battle in this game, but they will also need a special performance from Russell Wilson. Wilson has completed 66 percent of his passes this season, and has thrown 18 touchdown passes to just five interceptions.

Seattle looked like a mess on defense to begin the season, but Pete Carroll’s team has figured things out. The Seahawks are giving up just 19.5 points per game this season, which ranks in the top-5 in the NFL. Defensive end Frank Clark has recorded 7.5 of the team’s 21 sacks so far this season, and Seattle continues to play a reckless and physical style of defense. Seattle is allowing just 219 passing yards per game, but that number will be tested against Jared Goff and the Rams’ explosive playmakers.

Rams Need To Bounce Back

The Rams were flying high until crashing back to the ground in a week nine loss to the New Orleans Saints. Head coach Sean McVay will need to find a way to get his team to refocus and bounce back after losing an emotional game. Los Angeles gave up 45 points in that game, but their defense is still allowing just 22.2 points per game this season. Aaron Donald has recorded 10 sacks this season, and he and Ndamukong Suh will play a huge role in shutting down the Seahawks running game.

The explosive Rams offense is averaging 33.2 points per game this season, but they’ll be tested in this game. Quarterback Jared Goff has thrown for 2,816 yards so far this season, but has thrown six interceptions and takes risks at that position. Brandin Cooks, Robert Woods, and Cooper Kupp combine to form one of the best receiving corps in all of the NFL, combining for over 2,000 yards and 12 touchdowns this season. Running back Todd Gurley leads the NFL in rushing with 868 yards and 12 rushing touchdowns this season. LA will look to put on an offensive show in this game.

The Seattle Seahawks nearly upset the Rams earlier this season at home, but they blew their one chance. Los Angeles will be playing at home in this game, and they will be mad after losing last weekend to the Saints. Injuries will hurt the Seattle running game, and the Rams offense will take advantage of a tired defense. The Seahawks won’t have an answer for the explosive Rams offense, and LA wins in a rout. Bet the Los Angeles Rams -9.5 over the Seahawks on Sunday.