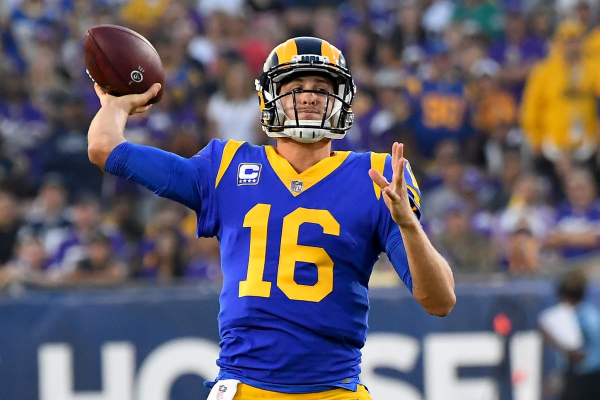 Sunday Night Football features the epitome of two teams who have not lived up to their potential as the Chicago Bears (4-5) travel to Los Angeles Memorial Coliseum to take on the Los Angeles Rams (5-4).  This NFC North versus NFC West showdown consists of two teams that were primed for a postseason run prior to week 1 but now seem like little but an afterthought.

The Bears sit in third in their division looking up at the Green Bay Packers and Minnesota Vikings while the Rams also sit third looking up at the 49ers and Seahawks.  For either team it is a long shot to make the playoffs, but both will start by looking for a win on Sunday.  Kickoff is scheduled for 8:20 pm ET.

For the Chicago Bears, they are coming off a less than inspiring victory over the Detroit Lions, 20-13.  While the Lions have not been horrific this season, they were without Matthew Stafford yet the Bears could still manage just a 7-point victory.  Before that, they had lost 4 in a row stemming back to the end of September.

For the Los Angeles Rams, they are 2-2 in their last 4, but they suffered a 17-12 defeat last week at the hands of the banged up Pittsburgh Steelers.  Their 2 wins over that span were against the struggling Cincinnati Bengals and Atlanta Falcons.  Needless to say, the once intimidating Rams have struggled to find any consistency and resemblance of their dominant selves from last season.

The Los Angeles Rams come into this as 6-point favorites playing at home.  The over/under for points scored is set at just 40 points.

On paper, the offense of the Los Angeles Rams has not been too bad this season. They currently rank 10th in the NFL in points per game averaging 25.1 (24.7 at home) Despite that, they are certainly not the dynamic offense of old, especially with Todd Gurley just a shell of himself and BrandinCooks out.  For the Bears, they fall to 27th in the league averaging just 18 points per game (20.5 on the road).  Sadly, this season has a lot of Bears’ fans questioning GM Ryan Pace and his selection of Mitchell Trubisky.

Can Bears Offense Pick Up From Last Week?

Last week, the Bears’ offense wasn’t completely atrocious.  Trubisky did throw three touchdowns, but despite that, they still only scored 20 points on the day.  This just exemplifies how rough the season has been for Chicago’s offense this season and I don’t see it getting better on Sunday.  On the season, Trubisky is 152 for 239 for 1,390 yards, 8 touchdowns, and 3 interceptions.  He has also been sacked 22 times.

Trubisky’s favorite receiver this year has been AllenRobinson.  On the season, he has 53 catches for 618 yards and 3 touchdowns.  His second-leading receiver is Tarik Cohen, who has just 38 catches for 216 yards. On the ground, David Montgomery is leading the way with 129 attempts for 466 yards and 5 touchdowns but is averaging just 3.6 yards per attempt.

Just like Mitchell Trubisky, the Rams’ Jared Goff has also struggled with consistency this year.  At least for Goff, though, he has shown flashes in the past of dominance.  Still, this season, Goff is just 214 for 355 for 2,610 yards, 11 touchdowns, and 9 interceptions.  He has also been sacked 16 times thus far.

On the ground, the leader for the Rams is Todd Gurley.  He no longer seems like the dominant force that became the highest-paid running back in the game.  Thus far, he has 104 rushes for 428 yards and 6 touchdowns.  He does also have 15 catches for 81 yards and another score.

Through the air, the loss of BrandinCooks hurts as it takes away a deep threat. Goff’s main target this season has been Cooper Kupp.  He has 58 receptions for 792 yards and 5 touchdowns.  Robert Woods has 45 receptions for 566 yards, but has yet to find the end zone.

Rams May Be Down This Season, But Not As Much As Bears

The Chicago Bears certainly have an elite defense still, but the problem is that even elite defenses break down when they are constantly on the field.  With the offense looking absolutely lost, there isn’t a whole lot of hope that they will be able to find success against a Rams defense that is relatively solid.  I really think Aaron Donald and company are going to run havoc on the front five for the Bears and I worry that Trubisky might spend a lot of time on his back. Even if the Bears defense plays amazing, I just don’t think the Bears will be able to put enough points on the board to keep up with them.  For my money, I am taking the Rams at -6.