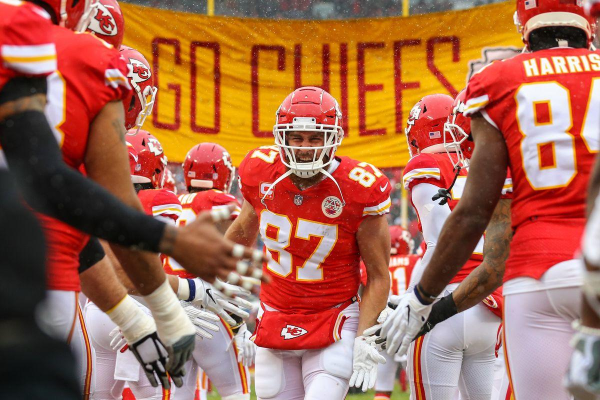 Next stop…Super Bowl! On Sunday, the New England Patriots (12-5 total) will travel to Arrowhead Stadium to take on the Kansas City Chiefs (13-4 total), with the winner earning the right to head to Super Bowl LIII. Both of these teams earned a bye through the first round of the playoffs and made relatively easy work of their opponents last week.

For the Patriots, they won 41-28 over the Los Angeles Chargers. In the game, Brady threw for 343 yards and a touchdown while James White had 15 catches for 97 yards out of the backfield. Throw on top of that Julian Edelman’s 9 catches for 151 yards and Sony Michel’s 24 rushes for 129 yards and the New England’s offense was dominant last week against a solid Charger’s defense. This week, they will be facing a far less intimidating defense against the Chiefs.

For the Chiefs, they won 31-13 over the Indianapolis Colts last week. In the game, Patrick Mahomes threw for 278 and, shockingly, no touchdowns. The ground game was the real key as Damien Williams (who had 129 yards), Tyreek Hill, Darrel Williams and Patrick Mahomes all had rushing touchdowns. The Chiefs are hoping for a better outcome this time around against the Patriots, as they lost 43-40 in week 6 of the regular season, although that game was at Gillette Stadium, a place where the Patriots went undefeated this season. The two will square off Sunday with kickoff scheduled for 6:40 pm ET.

The point spread for this one comes in with the Kansas City Chiefs being 3-point favorites playing at home. The over/under on total points scored is set at 56 points.

As good as the Chiefs’ offense is, their defense is equally as bad. They ranked 31st in yards given up per game (26.2) and 24th in points allowed per game (26.3). Despite the poor numbers, they did actually tie for 1st in the NFL in total sacks with 52. For the Patriots, they ranked 21st in yards given up during the regular season (359.1) but 7th overall in terms of points allowed per game (20.3).

Patriots Trying To Find Success On The Road

While the Patriots have been dominant at home this year, going undefeated for the season, they have struggled on the road. In fact, during the regular season, they went 3-5 overall. Still, with Tom Brady under center, anything is possible for the Pats in the postseason. During the regular season, Brady threw for 4,355 yards, 29 touchdowns, and 11 interceptions. His leading targets were Julian Edelman (74 catches, 850 yards, 6 touchdowns) and James White (87 catches, 751 yards, 7 touchdowns).

Speaking of White, he and Sony Michel have put together nice seasons in the backfield. In addition to his receptions, White has also rushed for 425 yards and 5 touchdowns while Michel has rushed for 931 yards and 6 touchdowns during the regular season.

Chiefs Offense As Dynamic As They Come

Patrick Mahomes has been absolutely mesmerizing this season. He is now trying to turn his fantastic season into a Super Bowl appearance. During the regular season, Mahomes threw for 5,097 yards, 50 touchdowns versus just 12 interceptions. His leading receivers were tight end Travis Kelce (103 catches, 1,336 yards, 10 touchdowns) and Tyreek Hill (87 catches, 1,479 yards, 12 touchdowns).

On the ground, the Chiefs have been going with Damien Williams and Spencer Ware in the backfield ever since releasing Kareem Hunt. During the regular season, Williams only rushed for 256 yards on 50 carries, but as mentioned earlier, last week he eclipsed the 100-yard rushing mark against the Colts. Spencer Ware has been dealing with health issues, but during the regular season, he contributed 246 yards and 2 touchdowns on 51 carries.

Chiefs In A Shootout

It is always hard to bet against Tom Brady and Bill Belichick, and if you took the Patriots, I can’t say that I could argue your reasoning. For me, though, I look at the season as a whole. While the Patriots have been dominant at home this year, the road has been a whole different story. The Patriots will put up their points against the Chiefs’ defense, but I am not sure they will be able to keep up with Mahomes, Kelce, Hill, and company. I am definitely taking the over, butI am also going with the Chiefs despite laying the 3 points in this one.