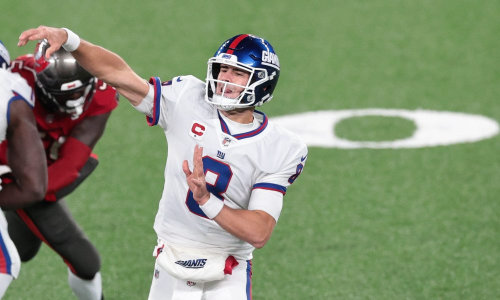 This Sunday, the New York Giants (1-7) head to Fedex Field to take on the Washington Football Team (2-5) in a pivotal NFC East matchup. Even though these two teams have just 3 wins combined, with a win Washington would be just a half game back of the Philadelphia Eagles for first place in the division.

Coming off a bye week, the WFT enters the game after a 25-3 win over the Dallas Cowboys in Week 7. This was a dominant performance by Washington as they outgained the Cowboys 397-142, had over 200 rushing yards, and this game was over at halftime as they led 22-3.

Rookie RB Antonio Gibson had his best game of the season going for 128 yards and a score on 20 carries, and WR Terry McLaurin finally broke out for 90 yards on 7 catches, including a 52 yard score. The defense also played their best game of the year as they limited Dallas to just 142 yards, sacked Andy Dalton and Ben DiNucci six times, and held the Cowboys to 3/12 on 3rd down conversions.

The Giants suffered a heartbreaking 25-23 loss to the Tampa Bay Buccaneers on Monday Night. One could argue that the Giants actually outplayed one of the better teams in the NFC. New York outgained Tampa 357-344, were up 14-6 at halftime, and were the first team to rush for over 100 yards vs. the vaunted TB defense.

Daniel Jones was 25-41 for 256 yards with 2 touchdowns and 2 INTs. His first INT at the start of the 2nd half gave the Bucs a short field and some much needed momentum. It was Jones’s 9th INT on the year, as he has continued to show an inability to avoid the big mistake. The Giants defense really shined on Monday Night as they held Tampa to just 81 rushing yards, and forced the Bucs off the field 66% of the time on 3rd down.

Washington’s offensive rankings are dreadful, and the only team ranked lower than them in most categories is….the New York Giants. The Football Team ranks 29th in pass yards, 29th in First Downs, 29th in passing touchdowns, and 30th in total yards. The Giants rank 31st in total yards, 30th in pass tds, and 30th in First Downs. Washington averages 19.0 PPG, good for 30th in the league. The Giants average 18.1 PPG which ranks 31st in the league.

These two teams are both certified dumpster fires on offense, and they lean on their defenses to keep them in games. Washington’s vaunted defensive line was able to get past a beat up Cowboys offensive line and rack up 6 sacks in their last game. The Giants have a top 10 rushing defense, and rely on strong LBs to stifle the run.

These two met in Week 6 with the Giants earning their first win of the year as they stopped a potential game winning 2 point conversion and escaped 20-19. Washington was driving late in the 4th quarter of a 13-13 game when QB Kyle Allen was stripped, and Tae Crowder scooped up the fumble and ran 43 yards for a TD that put the Giants up 20-13. Allen again drove down the field and hit Cam Sims in the endzone for a 22 yard pass with :43 remaining.

Head Coach Ron Rivera made the bold decision to go for 2, but Washington couldn’t convert, and dropped to 1-5 on the season. In that game, Washington outgained the Giants 337-240, but had just 1 sack, and forced only 1 turnover. QB Daniel Jones led the Giants in rushing with 74 yards including a 49 yard scamper, and did just enough to help the Giants earn the W.

Draftkings currently lists Washington (-2.5) as the favorite, with the total set at 42.5. Other than the Jets/Patriots MNF game this is the lowest total on the board, and that comes as no surprise.

Washington WR Terry McLaurin was targeted 12 times vs the Giants in their Week 6 matchup and ended up with 7 catches for 74 yards. In their last game vs. Dallas he went for 90 yards on 7 catches and a touchdown. McLaurin appears to be developing chemistry with QB Kyle Allen, and look for that to continue on Sunday. Rookie RB Antonio Gibson will look to build off his best game of the year, and OC Scott Turner would be wise to get Gibson as many touches as possible.

It seems as though the Washington Offense is starting to gain some momentum, and maybe clicking at the right time. I’m expecting a Daniel Jones turnover at some point which leads to a short field for Washington resulting in an easy score. I’m taking Washington -2.5.