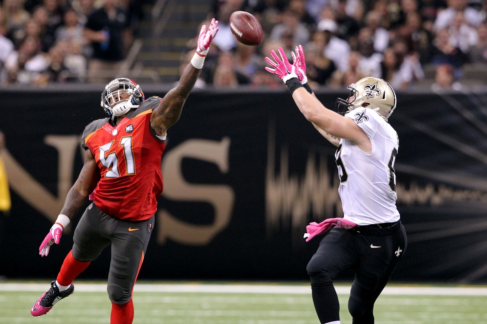 On Sunday Night the New Orleans Saints (5-2) head to Tampa Bay to take on the Buccaneers (6-2) in a primetime NFC South Showdown.

Tampa Bay enters the game coming off a thrilling 25-23 victory over the 1 win New York Giants. The Giants appeared to have drawn a defensive pass interference call on their 2 point conversion attempt, but after conversing, the referees decided to pick up the flag, and the game ended.

The Buccaneers offense was outgained by the Giants 357-344, and the Giants became the first team all season to rush for over 100 yards vs. Tampa Bay. Tom Brady continued his successful season as he threw for 279 yards and two touchdowns as he completed at least one pass to nine different receivers. So far on the year Brady has thrown for 2189 yards (4th in NFL), 20 Touchdowns (4th in NFL), and just 4 INTs (6th least).

The Saints also enter this Sunday’s matchup after a close victory. New Orleans escaped Chicago with a 26-23 Overtime Win as Will Lutz kicked a 35 yard field goal with 1:40 remaining to clinch the Saints victory. Drew Brees threw for 280 yards and 2 touchdowns as he surpassed 40+ pass attempts for just the second time this season.

Alvin Kamara was once again the leading receiver for the Saints as he had 9 catches for 96 yards, and added another 67 yards in the rushing attack. Kamara was once again the most targeted receiver for the Saints, and has more 30 targets on the season that any Saints wideout. New Orleans once again went for over 100 rushing yards as they carved up the Bears to the tune of 122 yards on the ground. The Saints eclipsed the century mark for rushing yards for the 5th time in 7 games this season, and currently rank 4th in the league in Rushing Touchdowns.

These two teams met in Week 1 in Tom Brady’s first appearance as a Tampa Bay Buccaneer with the Saints emerging victorious 34-23. In that game the Bucs lost the turnover battle 3-0, as Brady threw 2 interceptions, including one that was taken back for a touchdown. Tampa has only turned the ball over 5 times in the 7 games since Week 1, and Brady has only thrown 2 interceptions during that time.

Tampa outgained the Saints 310-271, but the turnovers did them in as the Saints cruised to an easy 11 point victory. Kamara was bottled up, only having 16 rushing yards on 12 carries, and no Saints receiver had more than 80 yards. Drew Brees threw for less than 200 yards, but did have two touchdowns, and hit TE Jared Cook 5 times for 80 yards.

Saints RB Alvin Kamara has yet to break 100 rushing yards on the ground this season, and actually has more receiving than rushing yards in 5 of 7 games. He has a team leading 142 touches and 987 yards from scrimmage on the year. He is the leading receiver on the Saints, and has commanded a team leading 66 targets in 7 games.

A lot of that has to do with the absence of WR Michael Thomas who has only played in one game. Thomas’s injuries have kept him off the field, and forced Brees to find other receivers and Kamara to get their passing game moving. Brees is only averaging 7.5 yards per attempt, which if holds, would be his lowest per attempt since the 2014 season. Much like the Bucs, the Saints offense has done a great job of protecting the football as they currently rank 4th in the league in fewest turnovers.

With WR Chris Godwin listed as Questionable for Sunday night’s game, newly signed WR Antonio Brown could demand some targets from Tom Brady. In Brown’s one game last season with the Patriots, he was targeted by Brady 8 times for 4 catches, 56 yards, and a TD. Head Coach Bruce Arians has raved about Brown’s preparation and the WR duo of Evans and Brown should excite Tampa Bay fans. Look for multiple catches and maybe even a TD from Brown on Sunday Night.

DraftKings is listing Tampa Bay (-4) as the favorite with the total set at 51.5. Some things to keep in mind as we approach this game: Tampa Bay’s Defense is ranked 3rd in total yards, 1st in rush yards, and 1st in rush yards per attempt. The Saints have the 3rd best run defense in the league, and both teams have limited turnovers the entire season. All of these things would seemingly mean that there is no way these teams hit the total.

However, Tampa Bay just allowed 357 total yards to a Giants offense that is drastically less talented than the New Orleans Saints. Tampa Bay has the 3rd best Red Zone TD percentage, meaning that when they are in the Red Zone, they score Touchdowns. Saints Kicker Will Lutz has missed just one kick this season (15-16 FG) (23-23 PATs), and Bucs Kicker Ryan Succop has had a great year as well (15-17 FG) (26-27 PAT).

The Bucs will be forced to throw the ball vs a stingy Saints Run Defense and the addition of Brown will open up chances for Mike Evans, Scotty Miller, and Rob Gronkowski. Brees and Kamara will be forced to keep pace, and that is a formula that leads to the over. Take the over 51.5.