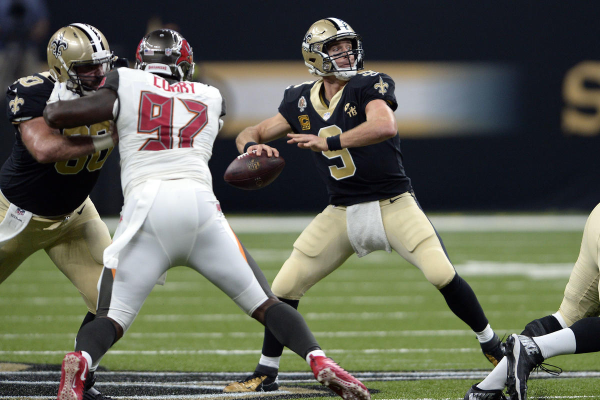 The New Orleans Saints will host the Cleveland Browns for an NFL matchup in week two of the regular season. Both of these teams are looking for a bounce-back victory after having a disappointing season opener. The Saints feature a veteran team with an All-Pro quarterback, while the Browns are a young team with an unproven offense.

The Cleveland Browns went 0-16 last season but headed into this season with high hopes and expectations. The Browns were able to tie the Pittsburgh Steelers in week one, but they blew some chances to win the game. The New Orleans Saints were embarrassed at home by the Tampa Bay Buccaneers, giving up 48 points in the week one loss. The Saints are an 8.5 point favorite in their matchup against the Browns on Sunday.

The New Orleans Saints should feature one of the top offense in the NFL this season, but they must find some defense if they want to win games. The defense gave up over 430 yards of total offense to the Bucs in game one and were especially bad against the pass. Saints cornerback Marshon Lattimore was torched by Mike Evans for 115 yards and a touchdown, but there was plenty of blame to go around. The Saints failed to record a sack in the season opener but should be able to get some pressure against the Browns inexperience offensive line.

Drew Brees and the Saints offense was nearly unstoppable in game one but were unable to overcome the defense. Brees was a remarkable 37-45 for 439 yards and three touchdowns in the season-opening loss. Michael Thomas was the recipient of most of those yards, hauling in 16 catches for 180 yards in the loss. Look for the passing attack of the Saints to have another huge game against the Browns in this one.

Taylor Solid At QB For Browns

Tyrod Taylor was good but not great in his week one start for the Cleveland Browns. Taylor was 15-40 for 197 yards and one touchdown in the week one tie but gave the Browns a chance to win the game. Browns wide receiver Jarvis Landry hauled in seven catches for 106 yards against the Steelers and Josh Gordon was able to catch a touchdown pass. The Cleveland offense should have more success through the air against a very weak Saints defense.

The Browns defense was the real surprise for Cleveland in week one. The team put a ton of pressure on Ben Roethlisberger and the entire Steelers team and forced them into committing six turnovers in the game. Denzel Ward was a ballhawk in week one, intercepting two passes thrown by Ben Roethlisberger. Former first-round pick Myles Garrett has six tackles and two sacks against Roethlisberger in the season opener. The Browns will need the same kind of effort from their defense against one of the best offenses in the NFL in week two.

The Cleveland Browns blew a great chance to snap their long losing streak, but things won’t be an easy for them in week two. Cleveland will need to put up a ton of points in this game to stay close with the Saints, but that is not a strength of this team. Look for the Browns defense to play well early in this game, before getting worn down by the explosive Saints attack in the second half.

The New Orleans defense was embarrassed by their performance in week one and should play much better in this game. Look for the Saints to blitz a lot more in this game in an effort to put pressure on Browns quarterback Tyrod Taylor. Drew Brees will have another monster game on Sunday and the Saints will run away from the Browns. Bet New Orleans -8.5 over the Browns in week two.