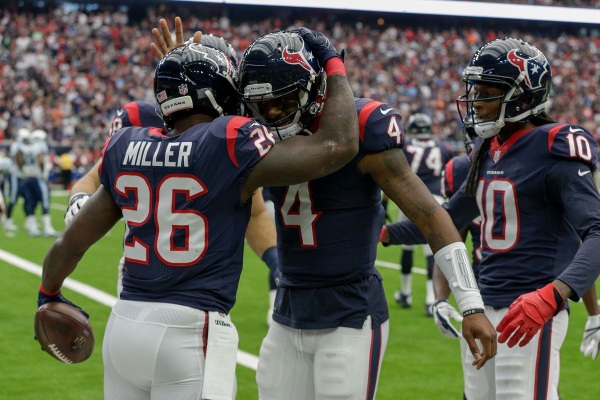 The Fantasy Football previewing has begun and last week we jumped right in and discussed not only sleepers, but also how these players will affect your sportsbook wagers as well. While the NFL is the biggest team sport around with twenty-two players on the field at once, one player can be the difference between a win and a loss or, more importantly, covering the spread. Tom Brady, Aaron Rodgers, Antonio Brown, these guys are winners and you want guys like them on your fantasy team as well as on your side of a wager.

A good fantasy football team and a good weekly wager have in common beyond just the money at stake. Collecting on both of them takes insight and we’re here to help. This week we’ll look at the players you need to avoid during your draft and during your time in the sportsbook. Don’t put your faith in these guys because they could ruin your Sundays in more ways than one.

The Lions QB put up some numbers last year and was a bigtime weapon on a fantasy football roster. Over 4,500 yards with 29 touchdowns is certainly pretty impressive. The words “career year” come to mind. Even though he will climb the QB rankings this year for sure, however, pay him no mind. The Lions are headed for a tough year and even though they addressed some needs on the offensive side (offensive line and running game) they lost a few pieces who will be missed. Especially tight end EricEbron. You want your QB throwing TD’s and Stafford won’t have the targets he needs to do just that.

After a strong rookie season, McCaffrey will be climbing many fantasy draft ratings boards. However, this year C.J. Anderson will be joining him in the backfield and if you thought Jonathan Stewart was taking touches away from McCaffrey wait until this year. Many teams are stockpiling running backs. Rosters now have two or even three running backs who receive plenty of playing time and Carolina is one of those rosters. Furthermore, Carolina is at its offensive best when Cam Newton is making plays and everyone gets involved. That’s good for Carolina but not your fantasy team.

Remember the good ole’ days when every team had one featured running back and got twenty carries a game? Well, those days are long gone. Cook was great as a rookie in Minnesota and this will get him plenty of attention on fantasy draft day. However, Cook is not a healthy man after a knee injury last year. Maybe he will be back to full speed, maybe he won’t but either way, the Vikings have Latavius Murray on hand as well and, he will take away touches from Cook, healthy or not.

If we are being honest, Jordy Nelson has always been a bit of an overachiever. He’s not the fastest. He doesn’t have the best hands. He doesn’t run the best routes. However, he was good enough at them all to catch a gang of touchdown passes from Aaron Rodgers. He and Rodgers had chemistry the likes we haven’t seen since Fred and Ginger. But now, out in Oakland and far away from Rodgers, he is poised for a downer of a year.

The Texans running back did not finish strong last year and many may not have noticed. Once Deshaun Watson went down with that terrible injury, Houston lost steam and most fans checked out. Yet, Lamar Miller remains a big name on draft boards where he should be much lower. Much, much lower. Stay away from Miller at all times because the only way he is getting any playing time is due an injury or two. Not the best odds for this player or this team.