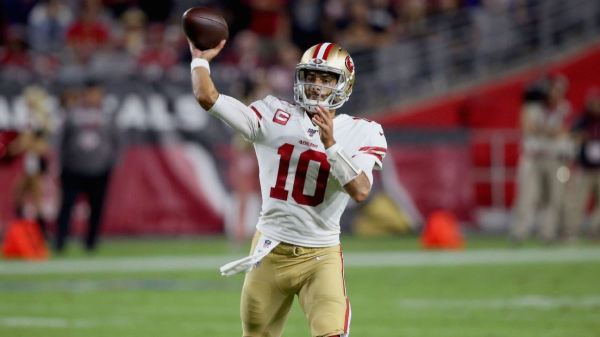 Monday Night Football features a battle of the NFC West with two of the best teams in the conference as the Seattle Seahawks (7-2) travel to Levi’s Stadium to take on the undefeated San Francisco 49ers (8-0). Even though this is just Week 10, this one holds significant playoff implications as the Seahawks are looking to overtake the 49ers in the division while both are battling for playoff spots. Kickoff for this one is scheduled for 8:15 pm ET.

The Seattle Seahawks have been rolling coming into this one, having won five of their last six contests, including wins over the Tampa Bay Buccaneers (40-34) and Atlanta Falcons (27-20) in the last two weeks. While it has been a strong start to the season, the Seahawks would love nothing more than a signature win over the unbeaten 49ers and have the players on both sides of the ball to possibly pull it off.

The San Francisco 49ers have been very impressive to start the season, particularly on the defensive side. In fact, in the last four weeks, they have allowed just 45 points (an average of less than 12 per contest) and that is keeping in mind they allowed 25 just last week in a 28-25 win over the Cardinals. Still, after having played the Cardinals, Panthers and Redskins in the last three weeks, this will likely be their toughest test.

The San Francisco 49ers come into this as six-point favorites playing at home. The over/under for points scored is set at just 47.5 points.

On the offensive side, these are two of the stronger teams in terms of points scored per game. The 49ers come into this one third in the league, averaging 29.4 points per game (35.3 at home). The Seahawks come in seventh overall, averaging 27.6 points per game (28.5 on the road).

On the defensive side, it is all San Francisco in this one. They rank second in the league, allowing opponents to score just 12.8 points per game on average (12 at home). The Seahawks are 22nd overall, allowing 25.6 points per game (21 on the road).

Hoping To Be First

For the Seattle Seahawks, it has been a really solid start to the season, and they would love nothing more than to come into San Francisco and steal one from their division rivals. Leading the way for the Seahawks will be quarterback Russell Wilson, who is 200 for 293 with 2,505 yards passing, 22 touchdowns and just one interception. He has been sacked 22 times, but part of that is his scrambling nature. In fact, on the ground, he has rushed 44 times for 203 yards and three touchdowns.

The leader on the ground for Seattle has been Chris Carson, who has rushed 175 times for 764 yards and three touchdowns. He also has 24 receptions for 177 yards and an additional two touchdowns.

The leaders through the air for Seattle have been Tyler Lockett and DK Metcalf. Lockett has 59 receptions for 767 yards and six touchdowns, while Metcalf has 29 catches for 525 yards and five touchdowns. Throw newly-acquired Josh Gordon into the mix, and this is a very talented wide receiving corps.

The 49ers have made a statement early in the season with their defense, but their offense has shown signs of life over the last few weeks as well. On the season, quarterback Jimmy Garoppolo is 160 for 226 for 1,806 yards, 13 touchdowns and seven interceptions. Unfortunately for Garoppolo, though, it appears he will be without his best weapon in tight end George Kittle.

Thus far this season, Kittle has 46 receptions for 541 yards and two touchdowns. With him out, look for newcomer Emmanuel Sanders to have a big night, although the Seahawks will most certainly be focused on shutting him down.

On the ground, the 49ers are led by Matt Breida and Tevin Coleman. Breida has rushed 99 times for 524 yards and one touchdown, while Coleman has rushed 83 times for 355 yards and five touchdowns. Again, with Kittle out, these two will likely need to elevate their games for this one.

Take The Seahawks And The Points

I really think this could be a slugfest on both sides, and it might even come down to a defensive score or special teams play to decide the outcome. Regardless, especially with Kittle likely out for this one, I think the 49ers could struggle a bit on the offensive side, and I think that it will really be close all the way down to the wire. Straight up, I am even leaning slightly to the side of the Seahawks, so it is a no-doubter to me to take them at +6 on the road in this one.