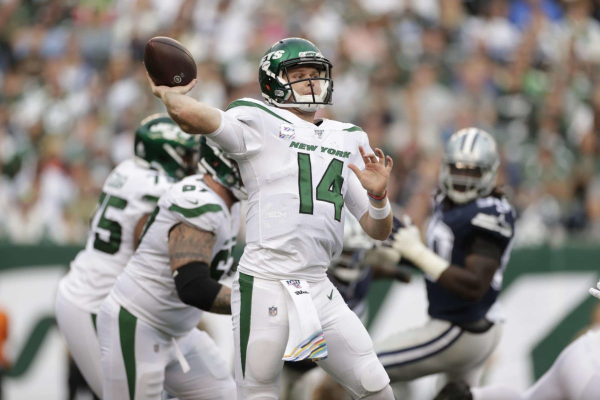 The Patriots have been absolutely dominant so far this season, and they are the clear favorites to win the Super Bowl. New England has rolled out to a perfect 6-0 start in 2019, and they are outscoring their opponents by close to 24 points per game.

The Jets had a miserable first five weeks of the season, but they will have some momentum heading into this matchup. New York stunned the Dallas Cowboys with a 24-22 victory in Week 6, which was its first win of the 2019 season.

The New York Jets drafted Sam Darnold as their franchise quarterback, but injuries have kept him off of the field for much of his career. Darnold returned in Week 6 and threw for more than 300 yards in the win over the Cowboys, bringing plenty of energy to the offense. Running back Le’Veon Bell has struggled to get things going so far with the Jets, but having Darnold back at quarterback should give him more space to run. The former Steelers running back is averaging just 3.0 yards per carry and has yet to find the end zone this season.

The Jets defense has struggled for much of the season, but it did turn in a great performance against the Dallas Cowboys. New York is giving up close to 25 points per game this season, and it will be tested in a big way against the Patriots. The Jets have just seven sacks so far in 2019, and they will need to find a way to get pressure on Tom Brady in this game.

Patriots Defense Has Been Legendary

The best defense in the NFL so far this season has belonged to the New England Patriots. New England is allowing just 8.0 points per game in 2019 and has yet to give up more than 14 points. Bill Belichick has a history of beating young quarterbacks, and he will bring plenty of pressure to Darnold. The Patriots have racked up 25 sacks already this season, as they create tons of havoc on that side of the ball.

On paper, it looks as if the Patriots offense is scuffling just a bit, but they are still averaging more than 31 points per game. Brady has been sacked 10 times already this season, and protecting him will be a huge key. Brady has still been sharp, throwing for over 1,700 yards already this season. The Patriots are in the bottom third in the league in terms of running the football, but they use the quick passing game to correct that issue. New England can score points when it needs to.

The Jets looked like a much different team with Darnold at quarterback, but this is still a very flawed team. The Jets don’t have many weapons to surround Darnold, and their defense has been a concern at times. It’s hard to find many flaws with the Patriots, and there is a reason that they are 6-0 this season. The Patriots are going to have little trouble with the Jets in this game. Bet the Patriots -10.0 over the Jets on Monday Night Football.