Mahomes Out; Are The Chiefs Dead In The AFC? 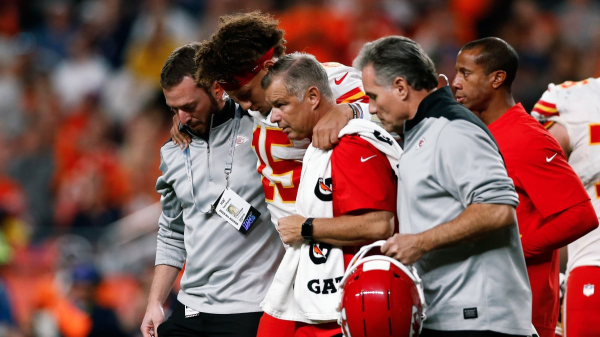 For any Kansas City Chiefs fan, the bad news far outweighs the good after Thursday night’s contest against the Denver Broncos. While Kansas City came away with the win, the price of victory was much higher than anyone involved in the Chiefs organization would have been willing to pay.

With just over nine minutes remaining in the second quarter of a 10-6 game, Patrick Mahomes took a fourth-down snap and completed a successful quarterback sneak to gain the first down. In the process, though, the reigning MVP suffered a dislocated kneecap, which was then popped back into place by the medical staff on the field. Mahomes was helped off the field and was unable to finish the game.

The Chiefs ended up winning the game 30-6 with backup QB Matt Moore filling in, but all eyes are now on the knee of Mahomes.

The Chiefs organization will be holding its collective breath as everyone awaits the all-important results of an MRI on Mahomes’ knee. Without the benefit of those results, the best-case scenario for Mahomes would be missing approximately three weeks.

However, if the MRI reveals any ligament damage with the knee, the injury Mahomes suffered Thursday has the potential to be a season-ending one.

Now, with Mahomes set to miss at least a few weeks of football, are the Chiefs in danger of falling too far back in the AFC standings?

After Thursday night’s win over the Broncos, the Chiefs now sit at 5-2 and in control of first place in the AFC West. Behind Kansas City, the Raiders (3-2) are second, with the Chargers (2-4) and Broncos (2-5) well behind.

Although Oakland has been a pleasant surprise, Los Angeles has been incredibly disappointing after being picked to compete with the Chiefs for the division title before the season kicked off.

So, Kansas City has a bit of a cushion within the division to give Mahomes time to recover and come back. But how much time can they survive without their MVP quarterback?

Over the next four weeks, the Chiefs have games against the Packers, Vikings, Titans, and Chargers, followed by a bye week. If the best-case scenario comes to fruition and Mahomes has suffered the cleanest of kneecap dislocations, Kansas City would perhaps be expected to target a Dec. 1 return date, which would give Mahomes added recovery time with the bye week that follows the Los Angeles game.

The Chiefs have certainly shown weaknesses in the team, so games against Green Bay and Minnesota will be difficult without Mahomes, meaning Kansas City would be hoping for a record of at least 2-2 over the next four weeks.

If Moore, who threw for 117 yards and a TD after taking over at QB, can get the Chiefs to 7-4, they should still have a great chance to win the division if Mahomes’ injury isn’t a season-ending one.

Within the AFC West, the Chiefs have been heavy favorites. Before knowing the extent of Mahomes’ injury, Kansas City held -360 odds of winning the division, followed by the Raiders (+500), Chargers (+600), and Broncos (+1600).

Even with Moore at the helm, Kansas City should have enough to win the division crown.

The bigger questions come when looking at the entire AFC, where the Chiefs have held the second-best odds of +474. Those odds place Kansas City in front of Houston (+900) and Baltimore (+1000), but well behind undefeated New England (-124).

With Mahomes missing any time at all, the Chiefs are in danger of falling too far back of the Patriots to have a chance at the top seed and home-field advantage, meaning Kansas City would have to go into Foxborough and beat the Pats in order to win the AFC.

It all comes down to just how bad Mahomes’ knee is hurt. If ligament damage ends the quarterback’s season, the Chiefs don’t stand a chance. Even if Mahomes is only out three or four weeks, the road to an AFC title will have gotten much tougher.