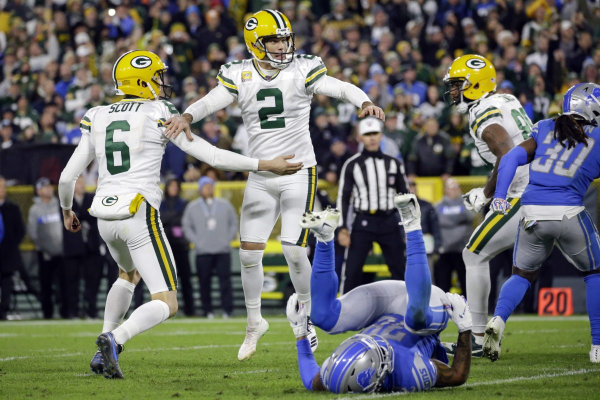 The first segment of the 2019 NFL season has been marred with poor officiating throughout, but the Green Bay Packers won’t be complaining after the referees played a part in helping them claim the lead in the NFC North.

When the dust settled on Monday night, the scoreboard read 23-22 in favor of the Packers after Mason Crosby put the Packers ahead of the Detroit Lions on a last-second, chip-shot field goal. But for players, coaches, and fans of the Lions, this one will sting more than the average loss.

On top of losing to a division opponent when a win would have put Detroit on top of the NFC North standings, the Lions will have to swallow the fact that they were beaten not just by Aaron Rodgers and the Packers, but by the officials as well.

Losing a game to a division opponent is hard enough on its own, so losing a game, at least in part, because of a pair of bad calls makes it all the worse. For Lions defensive end Trey Flowers, who was flagged twice in the fourth quarter, this will leave a bad taste in the mouth for a long time.

The Packers needed some late-game magic from Rodgers after the Lions jumped out to a 13-0 lead and looked the better team for much of the contest. A 10-point fourth quarter for Green Bay included a beautiful touchdown pass from Rodgers to Allen Lazard.

Rodgers finished 24 of 39 for 283 yards, two touchdowns, and one interception.

However, neither the Lazard touchdown or the last-second kick should have happened as they did. While we won’t know what would have happened if flags weren’t thrown, we know that there shouldn’t have been flags on two particular plays.

On two different third-down plays, Flowers was called for illegal hands to the face as he rushed the passer. Video replays showed that Flowers’ hands were placed on the blocker’s chest throughout both plays, meaning no penalties should have been called, but the penalty isn’t reviewable.

In the end, one penalty disallowed a sack and set up the Rodgers TD pass to Lazard, and the other allowed the Packers to run the clock down from approximately two minutes to three seconds before Crosby’s kick.

While penalties may have changed the result, the Lions will have to live with the consequences.

Do The Lions Have A Chance At Playoffs?

If Flowers hadn’t been flagged twice and the Lions ended up winning the game, Detroit would be 3-1-1, and Green Bay would be 4-2. Instead, the Packers are first in the division, and the Lions are looking up at all three other teams.

So, is the season all but over for Detroit?

The Lions have been a good team to start the year, earning wins over the Chargers and Eagles and taking hard-luck losses to the Chiefs and Packers. But if Detroit makes the playoffs, it’ll do so as a longshot.

Part of the problem for the Lions is playing in a tough NFC North, where we can expect a Wild Card team out of the Packers, Vikings, and Bears in addition to the division winner. To earn a Wild Card berth, the Lions would have to beat out the other NFC North team along with either the Eagles or Cowboys in the NFC East, and two between the 49ers, Seahawks, and Rams in the NFC West.

In the end, a pair of bad calls may have just made the Lions’ playoff hopes disappear.