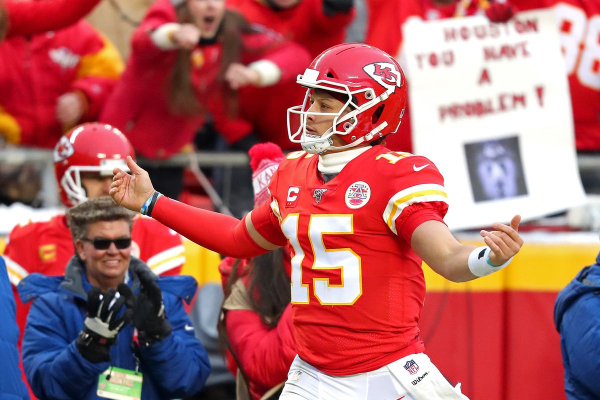 The top seeds in the NFC were able to take care of business during the divisional round of the NFL playoffs. In the AFC, though, it was a different story.

Now, the championship games are set in both conferences, and only a single win is needed for any of the four remaining teams to book a ticket to the Super Bowl.

Will the NFL’s Cinderella squad keep its magical run alive? Is it time for the NFL’s next great quarterback to reach the sport’s biggest game? Will a future Hall of Famer claim his second title? Can Tom Brady’s former backup make a name for himself?

The stage is finally set. Let’s take a look at how we arrived here.

Recap Of The NFL’s Wild Weekend

The weekend began with sixth-seeded Minnesota traveling to the West Coast to take on the top-seeded San Francisco 49ers. Both Kirk Cousins and Jimmy Garoppolo threw one touchdown and one interception, but San Francisco’s Tevin Coleman rushed for 105 yards and two touchdowns.

San Francisco’s defense controlled the contest from start to finish, led by a defensive line that sacked the Cousins six times. In the end, the 49ers won the game 27-10.

The other NFC playoff game featured a cold clash between the second-seeded Packers and fifth-seeded Seattle Seahawks in Green Bay. The Packers jumped out to a 21-3 lead at halftime and managed to hang on by virtue of a couple of vital third-down conversions to run out the clock in a game that finished 28-23.

Sunday’s AFC contest opened with a bang between the fourth-seeded Houston Texans and second-seeded Chiefs in Kansas City. A series of fumbles, broken coverages, and other odd plays helped Houston jump out to a 24-0 lead early in the second quarter. Five minutes later, the Chiefs trailed by only three points.

From that point on, Kansas City dominated the game, as Patrick Mahomes threw for 321 yards, five touchdowns, and no interceptions. What started as a scary contest for the Chiefs ended in a comfortable 51-31 victory.

The shock of the weekend and the season occurred when the sixth-seeded Tennessee Titans handled the top-seeded Baltimore Ravens with suffocating defense and a huge performance from Derrick Henry, who rushed for 195 yards and added a touchdown pass.

This year’s presumptive MVP, Lamar Jackson, was frustrated throughout the game that ended in Tennessee’s favor by a surprising score of 28-12.

Now, only four teams remain in the NFL playoffs.

Both the Packers and 49ers ended the regular season with 13 wins and solidified themselves as the top two teams in the NFC. Green Bay will be hoping for a better performance against San Francisco this time around after falling to 49ers in the regular season by a score of 37-8.

Despite having Aaron Rodgers at quarterback, this Packers squad is built on defense and running the football. However, the Rodgers-Devonte Adams combination was deadly against the Seahawks on Sunday.

San Francisco is a similar team, as one of the league’s best defenses leads the way while a running game is key for the offense. If 49ers tight end George Kittle gets going, he’s virtually impossible to contain.

Although every person in the NFL would take Rodgers over Garoppolo, a more complete San Francisco team is a seven-point favorite in the NFC Championship Game.

Titans Aim For Another Upset In Kansas City

All year long, the talk in the AFC surrounded the Ravens and Patriots. Well, Tennessee took care of them both on their way to the AFC Championship Game against the Chiefs in Kansas City next weekend.

Titans quarterback Ryan Tannehill hasn’t thrown for even 100 yards in either of the two playoff games thus far, but it hasn’t stopped Tennessee from winning. Instead, this team has won on the back of a mixture of the running game and a defense that allowed 25 combined points to the Patriots and Ravens.

On the other hand, the Chiefs are an offensive juggernaut led by perhaps the best young quarterback in football in Mahomes. Coming off a five-touchdown performance against Houston, Mahomes will need his best stuff to overcome a Tennessee defense that’s yet to allow 14 points in a playoff game this year.

So, who holds the advantage? If you’re a believer in momentum, the Titans should have the edge for this contest. If you’d rather lean on offensive talent and the home-field advantage, the Chiefs are sitting pretty.

At this point, the latter appears to be carrying more weight, as Kansas City enters the AFC Championship Game as a 7.5-point favorite.