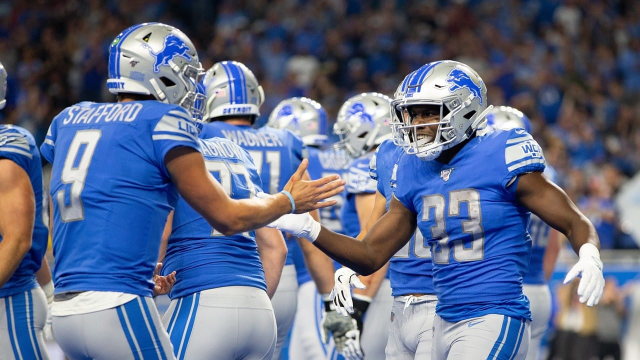 It’s a good thing for Doug Marrone and Matt Patricia that NFL head coaches stand up during a game, because both of them are riding hot seats. The Jaguars surprised the Colts in week 1 but haven’t won a game since. The Lions hit the road in week 3 to defeat the Cardinals in an upset, but outside of that, they’ve barely been competitive. The number 30 will be key in this game, which I’ll explain in a moment. This game could be a race to see which team gets to that number first. The Jags come in at 1-4, the Lions are 1-3.

The formula has been simple for Jacksonville this year. If the other team scores 30, the Jags lose. If they can hold the other team under 30, they have a shot. Needless to say, the other team usually gets 30. This also gives us some clues about the over/under number, which is among the highest in the league this week. The number of 54.5 may seem high, but it’s up there for a reason. The Jags are stopping no one this year, and Detroit hasn’t been a whole lot better. The Lions are responsible for one of the Chicago Bears thrilling comebacks this season and they were torched by Aaron Rodgers and Drew Brees for 42 and 35 points respectively. I’m willing to buckle up and ride the wave on this one. Touchdowns are coming in what should be a really good fantasy game. Take the over 54.5.

The Lions’ metrics are fooling you. Close losses to the Bears and Saints along with a win in Arizona might have observers feeling like this is at least a capable team when going against top competition. However, the truth is, their 6 point loss at New Orleans was a late back door cover, they got rolled by Green Bay, their loss to Chicago was a late choke, and the win at Arizona came before the Cardinals showed their true colors. The very next week, Arizona lost by double digits to middling Carolina before getting fat on the worst team in the league, the Jets, last week. Plus, Detroit has a habit of starting the season with some promise, then fading away once opponents get a book on them. They were 2-0-1 last year before finishing with only 3 wins. They were 3-2 in 2018 and finished with only 6 wins. Don’t get fooled, the Jags can hang in this one. Not only is the +3 spread attractive, but I also wouldn’t mind putting some action on the +140 money line. The Jags will have a shot late to win this game.

The one hesitation I have on the Jags in this game is a couple of questionable tags for key players. Wide receiver DJ Chark practiced very little all week with an ankle injury, and young pass rusher Josh Allen’s status is unknown because of a knee problem. Watch the inactive list on this one Sunday morning before making the pick. If one or both of them are out, you could get an extra half-point to fall in your lap, which at the current +3 would be huge. The Lions come in relatively healthy, though veteran running back Adrian Peterson received a questionable tag because of an illness. It might be time to start featuring rookie runner D’Andre Swift anyway.

Gardner Minshew has been sneaky good this year. Through 5 games, he’s already over 1,400 yards with 10 touchdown passes. He’s tossed 4 picks, but such is life when you’re often playing from behind. In this one, the Jags will keep it close. This will also allow them to better utilize exciting rookie running back James Robinson, who has popped off the screen as both a runner and a catcher this year. J-Rob is averaging a robust 4.6 yards per carry. The Jags are the play at +3. Side note, especially if you’re wanting to do something Lions related, put some units on the prop for Kenny Golladay to get into the end zone. He’s -121 to score and he’s hit pay dirt in both of his starts this year.