How can Mac Jones and the Patriots influence the NFL betting market? 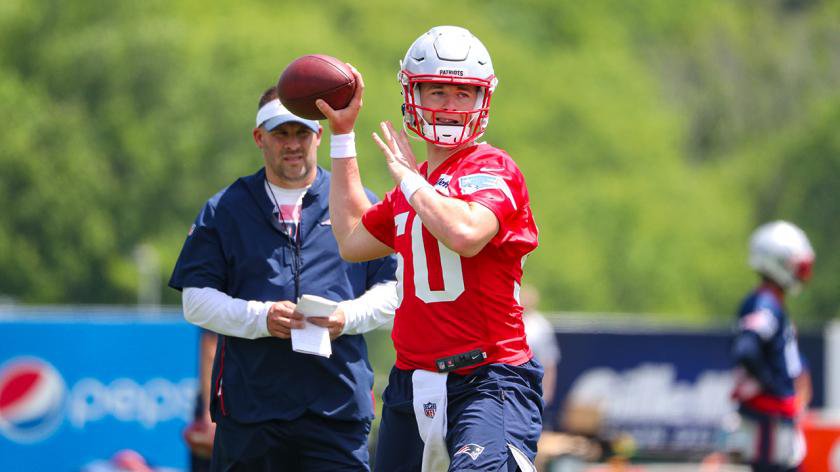 Mac Jones, by any measure, was an accomplished college quarterback, but his NFL future is far less certain – and that provides a range of options for futures speculators.

Drafted by the New England Patriots, Jones has begun his work toward winning the starter’s job over incumbent Cam Newton and answering a few of the many questions surrounding the Patriots’ betting value.

How the Patriots-Mac Jones relationship could reward the optimists

As OTAs began this week, most anaylsts believe Newton is the likely starter in Week 1, but Jones reportedly has been terrific in early reps.

“The ball comes out of his hands quickly, decisively and accurately,” Giardi said. “At least today, he threw the best ball of anybody in camp.”

Jarrett Stidham and Brian Hoyer are the other Patriots QBs at camp.

The veteran analyst was impressed with how Jones rebounded from a few misreads and poor throws.

“The thing you notice about Jones right away is that competitive edge we heard so much about at Alabama,” Giardi said. “When he made a play he didn’t like, today at OTAs, he slapped his thigh really hard multiple times. I’m thinking to myself, ‘That’s going to leave a mark, dude, that’s going to leave a bruise.’ But it tells you the perfection that he’s looking for.”

Jones’ Alabama career was not typical of other NFL rookies. Alabama has become a minor league of sorts for the NFL, with Southeastern Conference opponents providing top-quality challenges. While with the Tide, Jones directed a complex offense and became comfortable running a high-level system similar to that of the Patriots.

New England coach Bill Belichick will squeeze every ounce of talent from Jones, too, and is very likely expecting a better season than the 9-8 projections have presented.

Jones, too, has something to prove.

The San Francisco 49ers helped lead NFL draft analysts to the conclusion that Jones could be their choice with the No. 3 overall selection. Instead, they went with North Dakota State’s Trey Lance, a less-polished quarterback with a perceived higher upside than Jones.

When Jones fell all the way to No. 15, New England had its quarterback of the future.

Accuracy is Jones’ hallmark, and if he can deftly navigate the Patriots’ offensive schemes, he may just be a great fit.

With a dramatically improved receiving corps in 2021, Newton may be able to hold off Jones for some time if his better grasp on the offense translates to positive results during the season.

At +126 to make the playoffs, the Patriots – with a successful season from Jones as the starting quarterback – would seem to represent terrific value for those who believe in Jones’ leadership and upside.

How the Patriots-Mac Jones relationship could reward the pessimists

It’s much easier to point out the problem at quarterback in New England than it is to get behind either Newton or Jones.

When a college quarterback has operated in an elite-level system, his shortcomings aren’t always clear. That can mean NFL personnel experts may not be readily able to translate those college performances to the next level.

Tua Tagovailoa was the darling of the college football analyst crowd, winning awards and delivering a national championship.

Because he played for Nick Saban’s relentless machine at Alabama, though, his ability to tackle NFL defenses was somewhat in doubt.

Injuries and inefficiency have proved that the doubters were on to something. With the Miami Dolphins, Tagovailoa has been a starting quarterback, but certainly not a great one capable of lifting a franchise and leading it to a championship.

The book isn’t yet written on Tagovailoa, to be sure — he was 6-3 as a starter — but the scouts and personnel directors of at least 14 teams ahead of New England may have had his struggles in mind as they decided to pass on Mac Jones.

Tagovailoa ranked 26th in ESPN’s total quarterback ratings, and an NFL.com panel put him at No. 28.

“He came back this year at a much different position,” McDaniels said in an NBCSportsBoston.com story. “He has a different grasp of the offense, a different understanding of the terminology. Now we’re working on refining the precision, the details.”

Newton threw for 2,657 yards with eight touchdowns and 10 interceptions last season, while also rushing for 592 yards with 12 TDs.

With a +135 on the “Under” nine Patriots wins, that may be the angle taken by Mac Jones pessimists.

The doubts are understandable, but the Patriots are invested in Jones and, as a first-round pick, perhaps Jones has a clear path to excellence.

After all, a New England sixth-rounder named Tom Brady provided the Patriots with some high-quality seasons.