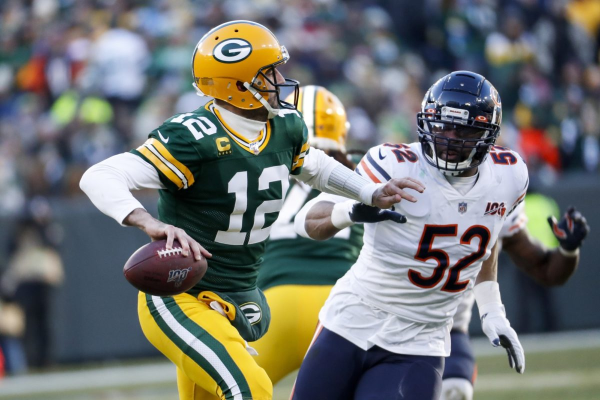 Monday Night Football features one of the most intriguing matchups of the week as it is an NFC North showdown as the Green Bay Packers (11-3) take on the Minnesota Vikings (10-4). There are a lot of division implications with this one as a Vikings win would create not only a tie in the overall records but the head-to-head records this season as well.

That would make Week 17 all the more interesting. Needless to say, both teams will look to bring their best games Monday with an opportunity to win the division on the line. Kickoff for this one is scheduled for 8:15 pm ET.

The Packers’ play has been inconsistent this season, but they are still finding ways to win. In fact, coming into this one, they have won three in a row and four of their last five. Still, they haven’t always been pretty, having beat the Bears just 21-13 last week and the Redskins just 20-15 the week before.

Still, they are finding ways to win and have already beaten the Vikings earlier this season. A win in this one would wrap up the division, so expect Aaron Rodgers to be on top of his game.

The Vikings have also won four of their last five, with their lone loss in that time being a 37-30 loss to the Seattle Seahawks. Their defense has been playing pretty well of late, while their offense has come around since a rough start to the season.

Despite a 39-10 win over the Chargers last week, they did suffer a big blow as star running back Dalvin Cook injured his shoulder and will be out for this one. Still, with a chance to win the division still in their reach, and playing at home, look for the Vikings to come out strong in this one.

The Vikings come into this one as five-point favorites playing at home. The over/under on total points scored is set at 47.

As always, as long as Rodgers is under center, the Packers have a good chance of being successful. This season has been no different as they come into this one at 11-3 while Rodgers is 300 for 474 for 3,463 yards, 24 touchdowns and just two interceptions. He has been sacked 32 times but has also rushed 41 times for 185 yards and a score.

Leading the way on the ground for Green Bay has been running back Aaron Jones, who has 188 rushes for 830 yards and a whopping 14 touchdowns. He has also been a contributor in the passing game with 45 receptions for 425 yards and another three touchdowns.

The Packers’ leading receiver has been Davante Adams with 63 receptions for a total of 788 yards and four touchdowns.

Vikings Hope To Prevail Without Cook

If Minnesota’s offense is going to have success, it won’t be able to rely on Cook in this one. Cook injured his shoulder last week and has been ruled out for Monday night. Cook has rushed 250 times this season for 1,135 yards and 13 touchdowns, while the team’s next leading rusher has been Alexander Mattison, who has 100 rushes for 462 yards and a touchdown.

Kirk Cousins has gone 291 for 413 for 3,481 yards, 25 touchdowns and five interceptions this season. Cousins’ leading receiver has been Stefon Diggs, who has 60 receptions for 1,073 yards and five touchdowns.

Adam Thielen, who has been injured for a good chunk of the season, should be good to go in this one. He has 30 receptions for 418 yards and six touchdowns this season in limited play.

Undoubtedly, the Minnesota Vikings have been playing some good football as they sit 10-4 and have a chance to even things up with the Packers on Monday. There is just one thing that has me leaning to take the Packers in this one, and that is the absence of Cook. He has arguably been one of the best running backs in the league this year, and his absence is a huge loss for the offense.

There is still a good chance that the Vikings pull this one out, but I do think either way, it is going to be close. With that in mind, I will take the team getting the points, which in this case, is the Packers. For my money, I am taking Green Bay at +5.