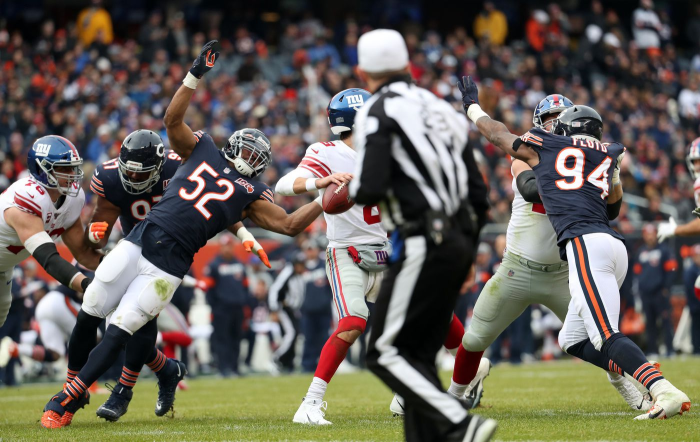 Sunday’s game between the New York Giants and the Chicago Bears is a match-up of one team that lost its first game and another team that probably should have.

Though they are not in the same division, these teams have met plenty over the years, including each of the last two. They split those two games and have split the last eight meetings dating back to 2004.

Kickoff is set for 1 p.m. ET at Soldier Field in Chicago, Ill.

Against the Detroit Lions, the Bears looked dead in the water through three quarters with QB Mitchell Trubisky playing a poor game. He found an ultra-high gear in the fourth quarter, though, and threw three touchdown passes to give the Bears a 27-23 win. The Lions, who closed as 2.5-point favorites, had a chance to win the game, but rookie RB D’Andre Swift dropped a 16-yard touchdown pass in the closing seconds.

The Giants put up a fight through the first quarter and a half against the Steelers and had a 10-3 lead. Pittsburgh closed the first half with a touchdown drive and scored 10 more points in the third quarter to cruise to a 26-16 win and relatively easy cover of the closing 6-point line.

As of Friday night, DraftKings and FanDuel both have the Bears back at 5.5-point favorites.

All of the head-to-head trends favor New York in this one.

Giants’ RB Saquon Barkley is one of the best in the league, but he was miserable last week against Pittsburgh when he had 15 carries for six yards. First-year head coach Joe Judge lamented the poor play from his offensive line following the game.

This week, DraftKings has Barkley’s rushing yardage prop set at 71.5, and it seems like a good time to take a shot at that. It won’t be this low too often, and it makes sense that Barkley and the Giants will be determined to get him going to set the pace of the game.

Giants QB Daniel Jones looked good for much of the game, but he did throw two interceptions. He had a great connection with WR Darius Slayton (6-102-2) and even showed off his wheels a few times when the play broke down.

Like the Steelers, the Bears have a defense that can cover pass catchers so if you liked what you saw when Jones ran for a few first downs, you might take a look at betting over 16.5 rushing yards on DraftKings. Jones had four carries for 22 yards last week.

After not playing in the season opener, Giants WR Golden Tate (hamstring) was a limited participant in practice all week and is listed as doubtful for Sunday’s game.

He averages 209 passing yards per game and has thrown less than two touchdown passes for every interception. His total QBR of 39.5 ranked 31 out of 34 QBs last season who attempted at least 200 passes.

He’s not so bad that he’s not capable of having a good game, but his number of average games is much greater than the number of his great games.

The Giants were in a bad spot last week with it being Joe Judge’s first game as head coach and facing the Steelers in Ben Roethlisberger’s return. The Giants’ offense has some upside and prepped last week against a strong defense.