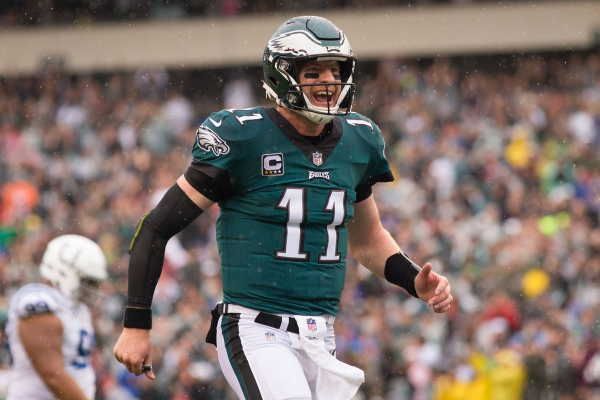 When making future bets on football, one thing that’s always certain is, injuries can turn the tables, especially if it’s a quarterback that goes down. Injuries are a problem in all sports, but losing your quarterback in football is probably the most devasting loss that any organization in a team sport can face.

Injuries are inevitable, but, of course, some players tend to be more vulnerable than others. A lot of big-name quarterbacks have gone down over the past couple of years and ruined many teams’ opportunities at a playoff run. Not only does it affect the team within that sport, but it can also negatively affect the bets made by the public within the sportsbooks.

One of the biggest injury-prone superstars to fall victim to the injury bug in recent years has been the quarterback of the Philadelphia Eagles, Carson Wentz. Wentz’s injury problems date all the way back to his days in college at North Dakota State. He missed eight weeks due to a broken wrist but was able to make it back in time for the championship game. Flash forward to his career in the NFL, Wentz went down with a hairline fracture in his ribs, forcing him to miss all of the preseason. Wentz was able to recover and make it back in time for the regular season.

The next season Wentz went down in week 14 against the Rams with a torn ACL. This forced the quarterback to miss the remainder of the 2017 season, although backup Nick Foles was able to lead the team to their very first Super Bowl win. The following season, Wentz was still recovering and was forced to miss the first two games. Wentz eventually missed the last three games of the season with a back vertebra fracture.

As the Eagles enter the 2019 season, all eyes remain on Wentz. The Eagles are one of the most well-rounded teams in the NFL and are the eighth-highest projected team to win the Super Bowl with 14-1 odds. If you knew Wentz could stay healthy, they would be a relatively safe bet to bring it home, but you don’t, no one does; so, this makes them a risky play.

After staying healthy his first three seasons in the NFL with the Colts, Andrew’s “Luck” seemed to fade. In 2015, he only played seven games after suffering a lacerated kidney. Luck was able to stay healthy for most of 2016, missing only one game due to a concussion.

He did have a lingering shoulder injury that the team seemed to brush off. At the end of the 2016 season, Luck underwent surgery which kept him out of the entire 2017 campaign. In 2018, Luck came back as strong as ever. He threw for 39 TDs (one short of his previous season-high) and made it into the second round of the playoffs.

The Colts and Luck played really well in 2018, finishing with a 10-6 record. They are projected to have the fifth-best chance at a Super Bowl finish in 2019. As of now, they have 12-1 odds to win it all. A future bet on the Colts may not be a bad route to take, but if Luck was to go down again, this would diminish any chances at them winning a championship.

There’s really not much to say about Jimmy G, because well, he hasn’t had much time to prove himself as a healthy quarterback. He started off his career as a backup for Tom Brady in New England. When given the chance to play, he suffered a shoulder joint sprain in the 2016 season, forcing the Patriots to play with their third-string quarterback, Jacoby Brissett. In 2017, Jimmy was awarded with a chance to start for the 49ers. In the five games he started, he went 5-0. Things were looking up for the ex-Patriots quarterback. In 2018 he was given the opportunity to shine when started for San Francisco. In week 3, though, he would suffer a torn ACL on his left side.

As the 2019 season closes in, Garoppolo is expected to make a full recovery and start week 1. The Niners definitely aren’t a team you expect to make a run this year, but at least with a healthy Jimmy G, they can put up a fight. Garoppolo had high expectations for the 49ers, as he was impressive for the Patriots, as well as San Fran in the few games he started. With 40-1 odds to win the Super Bowl, the 49ers aren’t a team that much of the public will be taking; but if Jimmy goes down again, expect that to move around the 300-1 mark.

Everyone knows Aaron Rodgers, the former MVP and Super Bowl champion. Speaking of that Super Bowl, it’s pretty unreal that Rodgers only has one. With a player of his caliber and the weapons that he’s had around him throughout the years, you’d expect at least one or two more championships.

Unfortunately, the superstar has had a whole slew of injuries throughout his career, but only two of them have forced him to miss more than a few games. Last year Rodgers was 100 percent healthy to start the season, and the Packers were expected to be back to their ways making waves. They were very far from doing so. After finishing 6-9-1, no one knows what to expect from the Packers anymore.

After an extremely mediocre season, the Packers come into the season with 14-1 odds to win the Super Bowl. These odds seem slightly skewed for a team that faced a lot of struggles last year. Obviously, the Packers are an unpredictable team, and with Rodgers under center, anything can happen. If Rodgers were to go down, they would most definitely bite the dust. He is an essential piece for their system to run smoothly, and they depend on him as much as any team depends on their veteran captain.

One of the most exciting young quarterbacks in the league is undoubtedly the Texans’ Deshaun Watson. The speedy and elusive quarterback had problems with his ACL/LCL in college, and it seemed to be more of the same when he tore his ACL in his first season with the Texans. In the six games that he started, he was able to put up monstrous numbers, including 19 TDs. His fate seemed similar to Carson Wentz, a promising young talent with a questionable injury history. Unlike Wentz, Watson was able to come back from injury and play all 16 games of the 2018 season.

Watson is a promising piece of the Texans squad that continues to grow. They have one of the best wide-outs in the game with Deandre Hopkins, who Watson has developed with to make for an extremely deadly duo. They open up with 30-1 odds to win the Super Bowl, which is right around where you would expect them to be.

They lost in the divisional round of the playoffs last year against the Colts, but look to improve on that finish this year. At 30-1 odds, they aren’t an awful low-risk, high-reward pick, but with so many other dangerous teams in the league, they’re more than a few pieces away from really becoming a huge threat to take it all home.