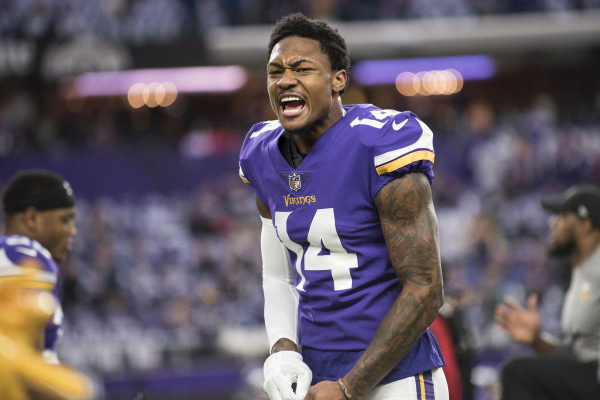 Sunday afternoon will offer a premier matchup when the Minnesota Vikings (6-4-1) travel to Gillette Stadium to take on the New England Patriots (8-3). For the Vikings, they have not lived up to the preseason hype as they were expected to run away with the NFC North. Currently, the Vikings sit in 2nd place behind the Chicago Bears, but still have their eyes on a division title. While they have been a bit inconsistent this season, the Vikings have shown that they have the talent to be elite, evidenced by their 24-17 win over the Green Bay Packers last week. For the Patriots, it is business as usual. With Tom Brady manning quarterback and Bill Belichick on the sidelines, they continue to be a dominant force year in and year out. They currently sit in 1st place in the AFC East by 3 games over the Miami Dolphins and are destined for another postseason run. These two teams will matchup Sunday with kickoff scheduled for 4:25 pm ET.

The point spread comes in with the New England Patriots being 5-point favorites at home. The over/under on total points scored is set at 49 points.

Statistically, the Minnesota Vikings have been solid on the defensive side. Currently, they sit 3rd in the NFL allowing just 314.7 total yards to opposing offenses. For the Patriots, they sit in 22nd in this category allowing an average of 377.5 total yards. Despite the big discrepancy, the difference in points allowed is rather small. On average, the Vikings are allowing 22.4 points to opposing teams (good for 10th in the NFL). Despite the big difference in total yards, the Patriots come in just after the Vikings at 11th, allowing an average of 22.6 points per game.

Vikings Looking To Put Wins Together

If the Vikings want to try to claim the NFC North title, they are going to have to start stringing some wins together quickly. To do so, they will look to quarterback Kirk Cousins to lead them. On the season, Cousins has thrown for 3,289 yards with 22 touchdowns versus 7 interceptions. He has also been sacked 28 times this year. His two biggest receiving threats have been Adam Thielen and Stefon Diggs. Thielen has gone for 1,138 yards and 8 touchdowns on 93 receptions while Diggs has 790 yards receiving and 6 touchdowns on 79 catches.

In the running game, the Vikings generally try to look to Dalvin Cook as their lead back. While he is expected to play this week, he has missed several weeks with injuries. As a result, he has rushed for just 228 yards on 65 carries this season. Technically, their leading rusher has been Latavius Murray, who has rushed for 455 yards and 5 touchdowns.

Defensively, they are led by Eric Kendricks (49 tackles), Danielle Hunter (11.5 sacks) and both Anthony Harris and Harrison Smith (3 interceptions apiece).

Patriots Looking To Get Healthy As Playoffs Approach

With the division basically in hand, the Patriots are trying to get healthy with the playoffs just a handful of weeks away. At times this season they have been without Rob Gronkowski, Sony Michel, Rex Burkhead, and others. The one consistent player has been Tom Brady. Like he has done for years with the Patriots, Brady has been a steady presence behind center. This season he has thrown for 3,031 yards, 19 touchdowns versus 7 interceptions. While he has 4 options who all have over 500 yards this season, his leading receiver has actually been out of the backfield. James White leads all receivers with 567 yards and 6 touchdowns on 67 receptions. White has also added 303 yards and 4 touchdowns on the ground. The leading rusher, though, has been Sony Michel, who has gone for 586 yards and 5 touchdowns rushing.

Vikings With The Points

It is always hard to bet against the Patriots, particularly when they are at home, but that is exactly what I am doing in this one. The Vikings have shown signs of life and are coming off of a big win last week against the Packers. While I think there are mismatches in the Patriots offense, I think the Minnesota defense will hold them in check enough while allowing Cousins and his talented receivers to keep the score close. The Patriots may end up winning this one, but for my money I am taking the Vikings and the 5 points.