Eagles Move Into Tie For First In NFC East 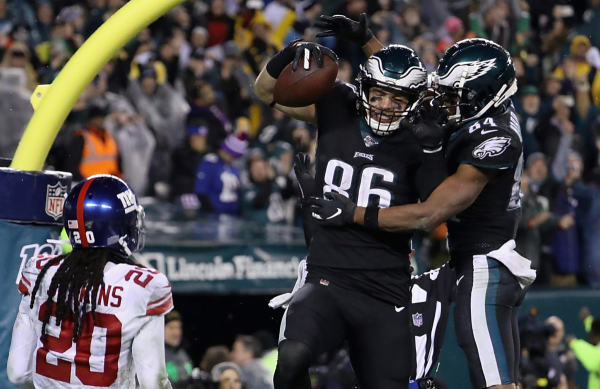 For about one half of football Monday night, it looked like New York Giants quarterback Eli Manning had returned to haunt the Philadelphia Eagles. Yet the career .500 quarterback with two Super Bowl victories under his belt wasn’t able to carry a terrific first-half performance into the second half of play, and Philadelphia managed to rally from behind to earn the 23-17 overtime victory.

It was virtually all Giants in the first two quarters of a game billed as the contest that would earn Manning either a winning or losing record. A 35-yard slant play and a 55-yard bomb to Darius Slay helped Manning and New York jump out to a 17-3 lead.

But from that point on, Manning did very little. For the game, the long-time Giants signal-caller finished 15 for 30 with 203 yards and two touchdowns.

Meanwhile, the Eagles needed more than 60 minutes to earn their sixth win of the season, but they got the job done.

A two-yard touchdown run by Boston Scott and a two-yard pass from Carson Wentz to Zach Ertz with just under two minutes to play tied the score up and sent the game to overtime.

Philly won the toss, and the contest was over eight plays later. In under five minutes, the Eagles drove 75 yards and won the game with another two-yard, Wentz-Ertz connection.

With the victory, Philly improved to 6-7 and is now level with Dallas atop the NFC East.

While most of the NFL wants to sit back and make fun of the NFC East as a division without a team above .500, the Cowboys and Eagles are only concerned with winning it. One way or another, the fourth seed in the NFC will be filled by Dallas or Philadelphia.

Monday’s win over the Giants made sure that Philadelphia controls its own destiny in that regard. However, so does Dallas.

If the Cowboys win out, they’re in the playoffs. If the Eagles win out, it’s them who will take the NFC East crown and earn playoff football.

Dallas has the tougher schedule, with games against the 8-5 Rams, 6-7 Eagles, and 3-10 Redskins down the stretch, while Philadelphia plays the 3-10 Redskins, 6-7 Cowboys, and 2-11 Giants to close the season.

There are a number of scenarios that could still play out, but this NFL season has drawn us closer and closer to the NFC East title coming down to the Cowboys-Eagles rematch in Philly.

It won’t be the first time an NFC East title comes down to Dallas versus Philly.

While much of the NFC East is likely to be decided by that Week 16 clash between the two contenders, it’s Philadelphia that has a more likely chance to enter that contest with a better record.

While the -5.5 Eagles will be playing the lowly Redskins next week, the Cowboys will be taking on a dangerous -1 Rams squad. If Dallas loses that game, two consecutive victories for Philadelphia would be enough to win the NFC East.

So, are the Eagles the new favorite?

It’s close, but Dallas is still the favorite to win the NFC East with odds of -130. Philadelphia is now tighter than ever with odds of +107, but it has yet to show its the better football team.

While other teams are locking down playoff berths, it’s still all to play for in the NFC East.