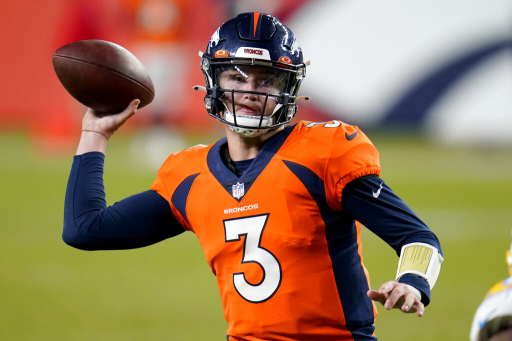 Coming off one of their biggest comeback victories, the Denver Broncos (3-4) hit the road to face the Atlanta Falcons (2-6) at Mercedes-Benz Stadium with kickoff slated for 1 p.m. The Falcons are also coming off a fourth-quarter come-from-behind victory and each squad has two wins in the past three weeks.

Trailing 24-3 midway through the third quarter, against the Los Angeles Chargers, the Denver Broncos offense — sparked by Phillip Lindsey and Drew Lock –, as well as their defense, finally woke up. Lindsay, who totaled 83 yards on six carries, got things started by scampering 55 yards for a touchdown with about six minutes left in the frame. Lock would then throw three straight touchdown passes with the last coming from one-yard out, as time expired, to KJ Hamler to give the Broncos a 31-30 victory. Lock finished the game 26 of 41 for 261 yards and three touchdowns — all season-highs — as he hooked up with seven different receivers. Overall, Denver outscored Los Angeles 28-6 over the last 21 minutes.

Atlanta’s defense came up with its best effort of the season, which was capped by cornerback Blidi Wreh-Wilson’s interception of Teddy Bridgewater’s deep pass with a minute left to seal the Falcons’ (25-17) victory over Carolina. The 17 points and 304 total offense, along with 154 passing yards, that Atlanta held Carolina to were all season-best marks for the defense. Meanwhile, the Falcons’ offense controlled the line of scrimmage, compiling 401 yards of total offense including 131 yards on the ground, and time of possession (36:30). However, the Falcons continued to struggle in the red zone as they converted just two of their six ventures inside the 20 into touchdowns.

Contralily, Atlanta is 14th in scoring at 26.1 points a contest and sixth in total yards at 401. The Falcons are second in passing yards (307.8), although they are just 19th in rushing yards (108.6). Atlanta has turned the ball just seven times, which is the sixth fewest in the league.

Defensively, Denver has the edge in terms of overall stats. The Broncos are 18th in scoring defense, allowing 26.1 points a game and 17th in total defense, surrendering 360 yards. They are also 16th in pass defense (255.3) and 18th against the run (123.4). The defense has forced eight turnovers (five interceptions) and recorded 20 sacks.

Meanwhile, the Falcons are allowing 28 points a game (22nd) and 410.6 yards a contest (28th). Pass defense has been Atlanta’s biggest issue as the Falcons are surrendering 328.3 yards (31st) a game through the air. They rank sixth in rushing defense (99.3) and have forced nine turnovers and recorded 13 sacks.

Broncos Look To get .500 For First Time

Denver has played better, particularly on the offensive side, lately and enters Sunday’s contest having won three of four to move within one game of .500 record which is quite an accomplishment with the adversity the team faced earlier this season. But in order for them to win at Atlanta — Denver is 2-1 on the road this year — the Broncos are going to have to avoid getting off to slow starts. While the Broncos have two fourth comeback wins, they have trailed four times at halftime and been outscored 101- 61 over the game’s first 24 minutes.

The good news is that Denver’s offense has picked up its production over the last four games, surpassing the 30-point mark twice and totaling its three highest total yards of the season. Plus, Lock seems to have started to figure things out the last two games – -throwing for 502 yards while completing 50 of 81 passes (61.8%) while tossing three touchdowns though he was picked off three times.

While Lock has played better, the key for the Broncos remains their two-headed monster running attack of Melvin Gordon and Philip Lindsay. Gordon, who is used more as a pass-catcher out of the backfield, leads the team with 375 yards and four touchdowns on 90 rushing attempts (4.17 ypc) to go along with 19 receptions for an additional 78 yards as well as a score. Lindsay, who is currently dealing with a foot injury, has been extremely productive over the past two games — racking up 162 yards on 17 carries — despite not being on the field much. The 26-year-old has totaled 287 yards on 45 attempts.

In terms of pass catchers, tight end Noah Fant leads the way with 29 catches for 304 yards and two touchdowns. Wide out Jerry Jeudy tops the team with 359 receiving yards on 23 receptions and one touchdown while Tim Patrick also has caught 23 passes for 354 yards and two scores.

Atlanta is 2-1 since defensive coordinator Raheem Morris replaced Dan Quinn as head coach and a big reason is the improvement of its defense. Since Morris has taken over control of the team, the Falcons’ defense has given up an average of seven points less than their season total along about 60 fewer yards. They have also recorded six sacks, four interceptions and perhaps more importantly, Atlanta has allowed its opponents to convert just 8 of their last 30 (37.5%) third down opportunities.

In the same token, the offense has been more explosive over the last three games with the return of wide receiver Julio Jones. However, the Falcons have struggled running the ball, producing just 2.98 yards per attempt, and they continue to struggle in the red zone. Atlanta has scored a touchdown only 53.3% of the time that they have gotten inside the 20.

Matt Ryan continues to be the offensive catalyst and he has played well recently, completing over 70% of his passes and has totaled more than 280 yards in each of his last three games while also tossing five touchdowns and one interception. For the season, the 35-year-old has thrown for 2,462 yards along with 12 touchdowns and four interceptions.

Todd Gurley has been a workhorse this year. While he has struggled in terms of yards per carry over the last three games, the veteran back has compiled 531 yards and eight touchdowns on 140 carries (3.79 ypc) as well as 13 receptions for 78 yards.

Atlanta is 0-4 at Mercedes-Benz Arena.

Note: Callahan, Lindsay, Patrick and Vannett are all expected to play on Sunday.

Note: Ridley did not practice this week though he is expected to be a game-time decision.

I am taking Atlanta to pick up its first home win of the season and to win by more than four points. The Falcons have just too many offensive weapons for the Broncos, especially with Bouye already ruled out, even if Ridley is unable to go. Plus, I believe Gurley — who gashed Denver for over 200 yards in his career lone game against them — will have a strong day against a Broncos’ defense that permitted the Chargers 210 yards on the ground. In addition, Atlanta has done a good job at pressuring the quarterback since Morris took over the team and Lock struggles when under duress, with both his decision-making and ball-protection.

I am also going with the under. While I believe the Falcons will tally at least 25 points, I don’t think the Broncos have enough fire power to keep up. Also, Denver’s red zone defense is pretty good as they have permitted 12 touchdowns in 25 trips inside their 20. Besides, the under is 11-5 in Atlanta’s last 16 home games.