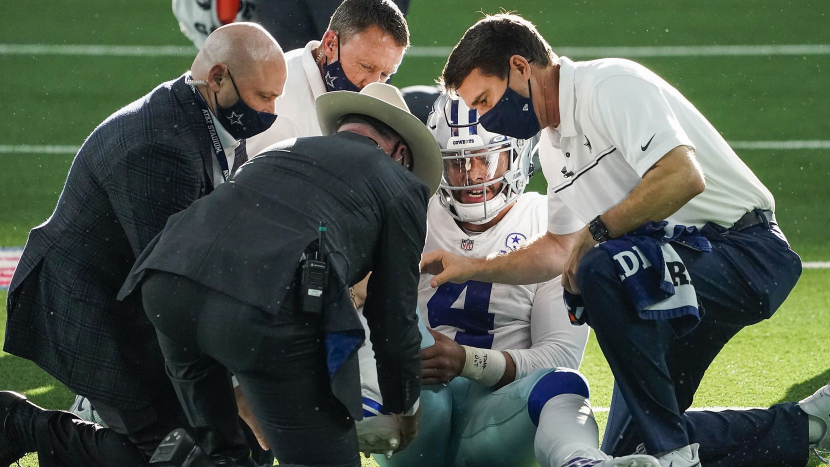 There was a major injury this past weekend in the NFL, as one of the league’s top quarterbacks, Dak Prescott, suffered a gruesome leg injury. In the third quarter of the Dallas Cowboys versus New York Giants game, Dak was trying to pick up a couple of extra yards when he was tackled, ending with a compound fracture and dislocated right ankle. Dak underwent surgery the night of the injury, and luckily enough, everything went well; he’s now on the road to recovery!

Dak and The Dallas Cowboys

Dak was in the midst of a contract year, having turned down a rumored 5-year, 35 million-dollar per year extension this offseason, which landed him the Cowboys franchise tag. This was truly sad to see as Dak had been tearing it up so far this year, on pace for career numbers; we hope to see him back in action again soon.

The Cowboys are currently 2-3, leading their division still surprisingly enough, so what will this mean going forth for them? Their new starting quarterback will be veteran Andy Dalton, who recently played for the Cincinnati Bengals. The running element that Dak brought to the position before is not going to be nearly the same with Dalton under center. Look for the Cowboys to lean on their reliable weapons, Ezekiel Elliot, Amari Cooper, and the emerging rookie deep threat, Ceedee Lamb.

Dalton is an experienced starter used to having a high volume of throwing attempts per game, like how the Cowboys had been operating. The playbook should remain open and relatively similar but look to dial down the bets on their points per game and other offensive wagers. Dak was playing at an elite level; it won’t be easy for Dalton to replicate that.

Dak was averaging 371 passing yards per game with a completion percentage of 68%, both on pace for career highs. He was leading the NFL in passing yards by over 260 yards and didn’t even play the final quarter last week.

DraftKings odds currently sit at +4000 to win the 2021 Super Bowl and -118 to win the NFC East. This injury had a monumental impact on how the Cowboys odds were going to play out this season. Dak was averaging 371 passing yards per game with a completion percentage of 68%, both on pace for career highs. He was leading the NFL in passing yards by over 260 yards and didn’t even play the final quarter last week.

Do you think they’ll be able to hold onto the division lead and make the playoffs?