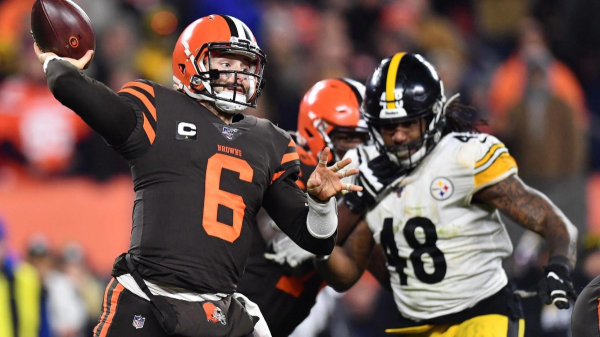 Week 12 of the NFL season is upon us, and this week has less clear chalk than most weeks. This means that we should have a lot of options to work with in both cash games and GPPs. With a lack of concentrated ownership in GPPs, I want to attack matchups and low ownership this week.

Right now, the two chalkiest QBs on the main slate are Matt Ryan and Jameis Winston, as they face off against each other in a high total matchup. This week, I expect to come in underweight on game stacks here because of this newfound pass rush and disruption in Atlanta. This is not me saying that individuals in this game cannot perform well, but I think the game stack will be over-owned in this spot.

Baker Mayfield is my favorite QB on most sites in his matchup with the Dolphins. While Mayfield has experienced a lot of ups and downs this year, he has seemingly improved a lot over the last few games against good pass defenses.

Now, Mayfield faces one of the worst teams in the NFL, and I think that it may be a spot where the Browns try to get right in the passing game. I think that Mayfield is a great option in GPPs, and I think he has nice stack options for tournaments too.

I expect Alvin Kamara to be the most owned RB in GPPs after he flashed his upside again last week a few weeks after returning to action. This is likely another spot that I will fade simply because there are a lot of tournament GPP plays that make a lot of sense.

If you want to spend up and pivot off Kamara, I like Josh Jacobs against the Jets. Jacobs was chalk last week, and I think he should have another solid game after he went for 112 yards against Cincinnati last week. He still got plenty of touches, and he should see the same this week against another bad team.

Assuming Bo Scarborough isn’t high-owned, I like him as a two-TD option at a cheap price. I don’t expect Scarborough to be some workhorse back, but he appears to be seeing the goal-line work, and this could be enough against Washington.

I really like Julio Jones as a one-off in the Falcons vs. Buccaneers game while fading most of the game. Jones has elite upside in every spot, and we have seen WR1s torch the Bucs all year long. I think Julio has his biggest game of the year in this spot.

Since we are going with chalk at WR1, I like going with Michael Gallup in a tough matchup in New England. We know that the Patriots will likely try to stop Ezekiel Elliott, and they’ll shadow Amari Cooper with Stephon Gillmore. This should benefit someone like Gallup, especially in a game that the Cowboys could be trailing.

I am going to stick to my guns again and take Ryan Griffin here. Griffin has seen a lot of snaps and a lot of looks from Sam Darnold when he has been the TE1. Griffin has produced at a high clip, and this matchup against Oakland is not a difficult one. Griffin should be under-owned due to his perception as a player.

If you want to go with a more traditional option, I still like Darren Waller on the other sideline in this game based on his athleticism and his target share. Waller has been a consistent option in most weeks, and his TD rate is too low for his production. This doesn’t even factor in the fact that Waller is one of the better athletes in the league at tight end.