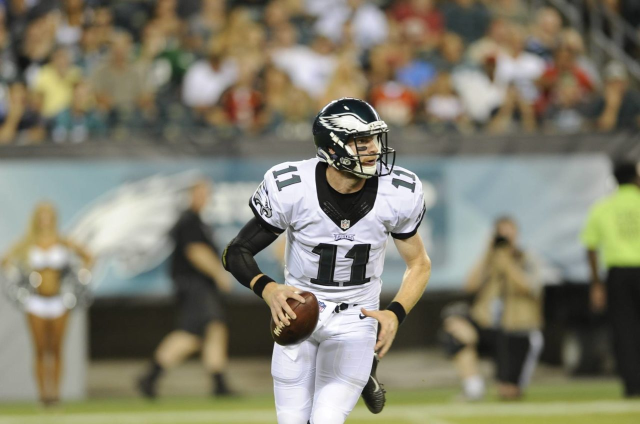 When the Dallas Cowboys and Philadelphia Eagles square off, it is usually must-see TV. If it was not a primetime game on Sunday night this weekend, however, this time would likely be lost in the shuffle of Sunday afternoon.

The teams enter their NFC East showdown with a combined record of 4-9-1, and the only intrigue involved is that they are both very much in the race to win the division.

The first-place Eagles (2-4-1) have struggled with injuries, but at least they still have starting quarterback Carson Wentz. The second-place Cowboys (2-5) are not so lucky. They are likely down to third-stringer and rookie Ben DiNucci after backup Andy Dalton suffered a vicious hit to the head and was concussed last week.

Kickoff is set for 8:20 p.m. ET Sunday at Lincoln Financial Field in Philadelphia.

Philadelphia fell behind by 11 points with less than seven minutes to go in the game but rallied to score two touchdowns and win 22-21 against the woeful New York Giants. It was not enough to cover the spread, which closed at -5 in the Eagles’ favor.

Dallas mustered just a first-quarter field goal in an ugly 25-3 loss to Washington, which closed as a 1-point favorite.

Trends should never be the most important factor in handicapping, but one does stand out for this game if you consider what it means.

The Cowboys are 0-7 ATS this season. Early in the schedule, that below-average performance was being blamed on the defense. Then starting quarterback Dak Prescott was lost for the season, and even the offense started to look lost on the field. In other words, Dallas has a lot of problems right now.

The Eagles are only 2-5 ATS this season, but at least they have shown some fight.

The Cowboys have not ruled out Dalton, but he had not practiced through Thursday. If he does not practice Friday, it is almost a sure thing he will not play on Sunday.

Whoever plays quarterback for Dallas likely will have the benefit of Zack Martin returning to the lineup at right guard. Martin was concussed two weeks ago and missed last week’s game. He was a full participant in practice on Thursday.

The Eagles got good news Thursday when right tackle Lane Johnson (ankle, knee) returned to practice on a limited basis. He has been a pivotal player, and his status is even more important this week because backup right tackle Jack Driscoll (ankle) missed practice on Thursday.

No matter which way you look at this game, it makes your stomach turn.

You might want to bet against the Cowboys because they seem to be spiraling out of control, but that would mean counting on the Eagles to be 10 points better than any team.

You might want to take the points with the Cowboys because it’s a division game, and those are usually close, but that would mean counting on rookie Ben DiNucci to be competitive in his first NFL start.

To save yourself the headache of rooting for the lesser of two evils, how about taking a shot at the under?

Philadelphia has its starting quarterback, but its offensive line is decimated by injury – so are its wide receivers. The Eagles have given up 14 sacks in the last three games. Last week against the struggling Giants, these Eagles had 10 points with five minutes left in the game.

Dallas, on the other hand, has great skill players but scored only 13 points in two games with Dalton as the starter. Now they will be starting a quarterback who transferred to FCS-level James Madison after he couldn’t cut it at the University of Pittsburgh.

Another good betting angle could be the Eagles’ second-half point spread or even fourth-quarter point spread.

They scored two late touchdowns to beat the Giants last week, and two weeks ago they scored 22 points in the fourth quarter to cover the spread in a 30-28 loss to Baltimore.

If Philadelphia is playing from behind in the second half, it will have the extra benefit of going against a Cowboys defense that has been one of the worst in the league.