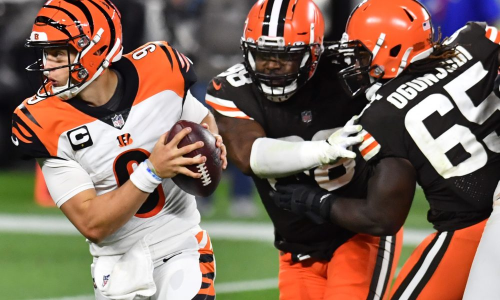 On Sunday, the Cleveland Browns (4-2) head to Cincinnati to take on the Bengals (1-4) in a 1:00pm AFC North battle. These two teams met Week 2 in a Thursday night game that saw the Browns come away with a 35-30 victory.

Last week the Browns had their four game win streak snapped by the Pittsburgh Steelers in a 38-7 blowout on the road. Baker Mayfield was benched after throwing two interceptions, and the offense put up an abysmal 220 yards against a stout Steelers team. Defensively, the Browns held the Steelers to under 300 yards, but this game was never close, and the Steelers moved to 5-0 and remain atop the AFC North.

The Bengals come off a disappointing 31-27 loss against the Indianapolis Colts, as they faded down the stretch. Cincinnati held a 24-7 lead halfway through the second quarter after a Randy Bullock 47 yard field goal, but then were outscored 24-3 to close the game. Joe Burrow (25-39, 313 yards, 1 Int) played well enough to earn his team the win, but the defense gave up 430 total yards and couldn’t get a stop when they needed it.

As of October 20th, Draftkings lists the Browns (-3.5) as the favorite, with the Over/Under listed at 50.

The Browns defense has struggled all year. They’ve given up the 3rd most points (31 PPG), 4th most pass yards, 5th most passing touchdowns, and 5th most redzone touchdowns. They give up an average of 5.5 yards per play, and have allowed the 2nd most first quarter points (51). The Bengals D isn’t much to write home about either though. They give up 26 PPG, 5.9 yards per play, 6th most total yards, and 5th most rush yards. They have also allowed the fourth most second quarter points with 67…(see a theme here?)

Offensively the nod goes to the Browns, who are a top 10 scoring offense at 27 PPG. They have scored 79 points in the 2nd quarter (best in the league) and lead the league in rushing averaging over 169 rushing yards per game. The Bengals have a bottom 10 offense, scoring just 21 PPG. They have the third worst rushing offense, and a middle of the pack passing attack.

With Nick Chubb sidelined for at least the next couple weeks, look for Kareem Hunt to have a monster game. The last time these teams played, the Browns rushed for 215 yards and 3 touchdowns while averaging over 6 yards per carry. While Hunt was bottled up last week by the Steelers, it’s important to point out that the Steelers are the number 1 ranked rush defense, and the Browns were trying to throw their way back into the game. Look for Kareem Hunt to run wild against the Bengals and find the endzone multiple times.

Odell Beckham had 4 receptions for 74 yds and a touchdown last time vs the Cincinnati secondary, but has yet to have a 100 yard game this year. Could this be Beckham’s breakout game vs a Bengals team that ranks as a bottom 10 pass defense?

In just his second career NFL start, Joe Burrow lit up the Browns secondary, throwing for over 300 yards and 3 touchdowns in their Week 2 matchup. Look for Burrow to sling it all game again as he comes off a 300+ yard performance against a relatively good Indy D. Last week Joe Mixon was banged up with a foot injury, so look for Zac Taylor to rely on Burrow and his young receiving corps to keep them in the game. Tee Higgins (6 rec, 125 yards) and Tyler Boyd (5 rec, 54 yards) are both coming off strong performances and should see plenty of targets against a Browns defense that struggles vs. the pass.

Currently the First Half total is 24.5, and I LOVE the over. This feels like the kind of game that could be 17-14 by halftime. Both teams give up a ton of points, the Browns lead the league in 2Q scoring, and Cincy can’t stop anyone right now.

I also like the over for the 1H team total of 13.5 for the Browns. All you need is two first half TDs and you cover? Feels like another winner. If you want to get greedy, take the over on the Browns team total of 26.5 for the game. It’s right on the number of their season average of 27 ppg, but Kevin Stefanski will try to get Baker some confidence after last week’s benching. Don’t be surprised to see the Browns attempt to blow out their division rival and hang a big number.