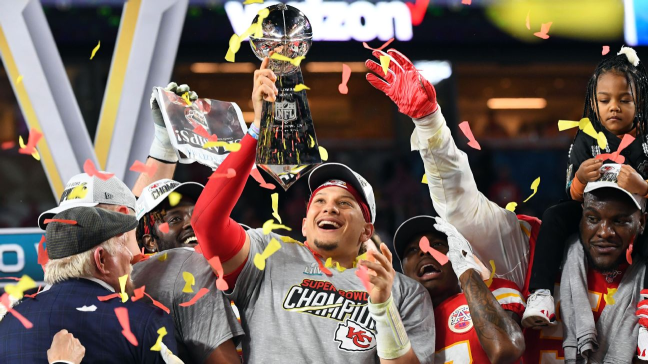 Ever since Patrick Mahomes exploded onto the NFL stage, it’s always felt like it was only a matter of time until he would lead the Kansas City Chiefs to a Super Bowl victory. Still, it happened even sooner than many expected, as Mahomes is now the youngest player in NFL history to win both a Super Bowl and league MVP.

But while the vision of Mahomes holding the Lombardi Trophy felt like an inevitability, it still looked a far way off as the fourth quarter of Super Bowl LIV got underway in Miami Sunday. With less than 15 minutes to play, the Chiefs trailed the San Francisco 49ers by 10 points.

To this point, Kansas City’s high-powered offense had been largely contained by a dominant San Francisco defense. Then came the play of the game.

On third-and-15, Mahomes dropped back and launched a pass just before the rush got to him. The speedy Tyreek Hill threatened the safety to the inside and broke toward the sideline. The ball fell into Hill’s lap, and the comeback was on.

With six minutes to play, the Chiefs would complete that drive with a TD to cut their deficit to three points at 20-17. And after officials missed a helmet-to-helmet penalty that would’ve extended San Francisco’s next drive, Kansas City drove the ball down the field and took the lead with a five-yard touchdown by Damien Williams.

Williams would add another touchdown on a 38-yard run as the Chiefs tried to drain the final seconds from the clock. In the end, Kansas City won Super Bowl LIV by a score of 31-20.

After Mahomes’ MVP season a year ago, we’ve come to expect greatness from the 24-year-old. However, Mahomes was far from great on Sunday evening.

Often hurried by the San Francisco pass rush, Mahomes looked uncomfortable for stretches of the game. In addition to several throws behind or short of his receivers, Mahomes tossed two interceptions.

Yet the Kansas City QB did what he’s done all playoffs – come from behind to win. On the back of his two late touchdown drives, Mahomes was named Super Bowl MVP after going 26-of-42 for 286 yards, three total touchdowns (one rushing), and two picks.

Mahomes is also the youngest quarterback to win Super Bowl MVP, and at 24 years and 138 days, he’s become the youngest QB in NFL history to win both the Super Bowl and league MVP.

It was a dream-like night for Mahomes and the Chiefs, who were able to earn coach Andy Reid his first Super Bowl title. Yet many bettors may not be so happy with the Kansas City quarterback after they suffered the worst bad beat of Super Bowl Sunday.

Coming into the contest, the mark on Mahomes’ rushing yardage over/under had been bet up to 36.5 yards after opening at 27.5 yards. Through roughly 59 minutes of the 60-minute game, Mahomes had racked up 44 yards on the ground.

Yet with a 31-20 lead as the Chiefs earned a final possession with 57 seconds remaining, Mahomes was never going to do anything but kneel the ball. The hard part for bettors to take is the fact that each of Mahomes’ kneel-downs took five yards from his rushing total.

In total, Mahomes lost 15 rushing yards on three kneel-downs to finish with 29 rushing yards, short of the 36.5-yard line. And so, in the final seconds of an already-decided game, Mahomes cost bettors who played the over on his rushing total in one of the toughest beats you’ll ever see.