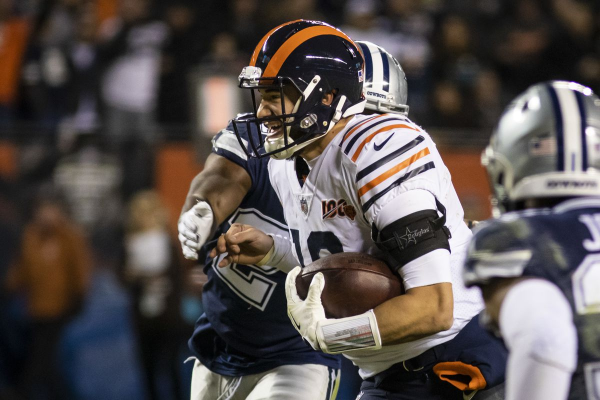 Sunday afternoon features an NFC North showdown as the Chicago Bears (7-6) travel to Lambeau Field to take on the Green Bay Packers (10-3). In what is considered one of the biggest rivalries in the NFL, these two teams are both out for blood.

The Bears are trying to keep their postseason hopes alive, though they would have to win out and still get some help to get in. Despite that, they still believe they have a chance, and a win over the division-leading Packers would be a good start.

The Packers would love nothing more than to knock the Bears out of playoff contention after Chicago won the division last year. A win would further secure Green Bay’s chances of making the postseason as well. Kickoff for this one is scheduled for 1 pm ET.

Coming into this one, the Bears have actually been playing some good football. Despite having inconsistencies early on, they have now won four of their last five to get a game over .500. Last week, Chicago beat the Cowboys at home on Thursday Night Football. The Bears are also hoping for a reversal of fortunes from their season opener when they lost to the Packers 10-3 at home.

There has been a decent amount of inconsistency to Green Bay’s game lately. Yes, the Packers have won two in a row, but last week, they only managed to beat a struggling Redskins team 20-15. You just don’t know what you are going to get from the Packers week to week, but they generally play well at home and will be even more inspired squaring off against the Bears.

The Packers come into this one as four-point favorites playing at home. The over/under on total points scored is set at 40.5.

If the Bears are going to have any hope of upsetting the Packers, they are going to need quarterback Mitchell Trubisky to continue playing well. After struggling much of the season, he has finally started to pick it up as of late. Part of the reason for this is because he is getting out of the pocket and using his legs more.

Last week, Trubisky rushed for 63 yards to go along with his three passing touchdowns. On the season, he is 253 for 392 for 2,440 yards, 16 touchdowns and eight interceptions, while rushing 36 times for 143 yards and an additional two scores.

Chicago’s leading receiver is Allen Robinson, who has 76 receptions for 898 yards and seven touchdowns. Anthony Miller has also shown promise over the last several weeks and has 41 catches for 531 yards and a score.

The Bears will need their defense to be good again, and they will be getting a huge addition this week, as Akiem Hicks is set to return from the injured list. That will help the front line trying to get pressure on Aaron Rodgers. Still, last week did see a costly loss, as Roquan Smith was knocked out for the season with a pectoral injury.

The Packers control their own destiny at this point, and the team is in good hands with Rodgers under center. Rodgers is 284 for 441 for 3,260 yards, 23 touchdowns and just two interceptions, though he’s been sacked 31 times. Rodgers has also rushed 38 times for 162 yards and another touchdown.

The leading rusher for the Packers is Aaron Jones, who has rushed 175 times for 779 yards and 12 touchdowns. He also has 45 receptions for 425 yards and another three scores. Jones is second in receptions only to Davante Adams, who has 56 catches for 685 yards and three touchdowns.

Hard To Bet Against Packers

It is true that the Bears have been playing considerably better of late, and their defense gets a boost with Hicks. The problem, though, is I could see the loss of Smith being a huge issue, and Hicks will likely not be out there every down as he is coming back from injury.

Throw on top of that the fact that Green Bay is 6-1 at home and really strong at home against the spread, and it seems like there is a good chance that the Packers not only win but also cover. With their recent play, I wouldn’t blame you for taking a chance on the Bears, but for my money, I will take the Packers at -4.