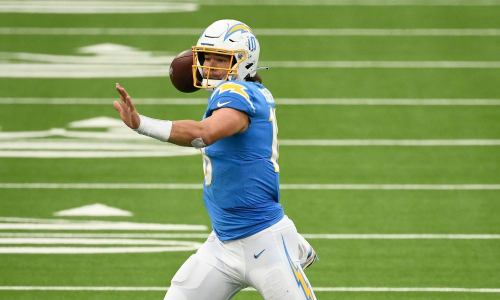 Not all 2-4 teams are built the same. The Los Angeles Chargers visit the Denver Broncos Sunday and the division foes have identical records. However, one of these teams is clearly in a rebuild, while the other hasn’t given up on a playoff run. One young quarterback has dealt with injuries and spotty play, this year while the other has immediately shined after being thrown into service.

The former in both cases is the Broncos, the latter the Chargers. Drew Lock and the Broncos stunned the Patriots 2 weeks ago, but that was before we knew how awful the Patriots were. The Chargers beat up the Jags last week to snap a 4 game losing streak behind impressive rookie Justin Herbert – much more on Herbert in a moment.

The Chargers may have a weak record in the standings, but their record against the spread is almost perfect. They’re 5-1 this year, mainly because young Herbert is navigating a tough schedule and at least keeping games close. His 4 game losing streak to start his career was nothing to be ashamed of, considering that the opposing quarterbacks in 3 of those 4 games were Patrick Mahomes, Tom Brady and Drew Brees. Welcome to the league, kid.

All 4 losses were also by 7 points or less. He’s averaging over 300 yards passing per outing and has 12 touchdowns to go against 3 interceptions. He’s the real deal and will be a problem for Denver.

Meanwhile, the Chargers defense, which has been mediocre, gets to deal with Lock Sunday. He’s started 4 games this year and has one touchdown pass – ONE! For a defense that’s dealt with Brady, Brees, and Mahomes this year, this should feel like a week off.

Home is Where the Hard Is

COVID-19 has changed a lot of things in sports. But quite possibly the biggest difference is the loss of home field advantage. There are no fans, so teams like the Chiefs, Seahawks, Saints, and yep, the Broncos, have lost an edge. You’d think the mile high thin air would still be an issue for visiting teams, but Denver has lost all 3 of their home games this year and their last two, against Tampa Bay and Kansas City, were blowouts. You do have to wonder how it might affect Herbert, who has never played in the state of Colorado despite coming up through the Pac 12.

How Low Can You Go?

The Broncos have scored more than 21 points only once this year, and that was against the Jets. Also, Lock wasn’t even the quarterback that week. This gives you an idea as to why the over/under number is one of the lowest of the week in the NFL at 44.5. Take the under. These two have a history of low scoring slugfests and, as mentioned, Lock just does not get the Broncos to pay dirt. Herbert is a star, but Chargers coach Anthony Lynn, a former running back, would love nothing more than to use run game to grind the clock if he can get an early lead. Speaking of running backs, a lot will be made of Melvin Gordon going against his old team in this one. Sure, he’ll be motivated. But do you think his ex Chargers teammates will also be motivated after he held out on them last year in search of more money? I certainly do.

Herbert has been pretty this year. Don’t expect that in this one as it just won’t be that type of game. I think the combo of Justin Jackson and Joshua Kelley in the Chargers backfield will lead the way in a game that is going to take some guts. The Chargers are the better team with the better offense, but that tricky half point could make you queasy. Still, I like the Chargers. Lock’s offense looks totally lost and I’d be shocked if the Broncos get to 20 in this game. I love the under, and I like the Chargers.

After extending their hot and San Diego’s cold streak, the Seattle Mariners will be looking to leave Petco Park with a two-game sweep as they take on the Padres this afternoon. Yesterday, the Mariners pounded out a dozen hits and plated eight runs, and Chris Flexen pitched 6.2 shutout innings to collect his third straight END_OF_DOCUMENT_TOKEN_TO_BE_REPLACED