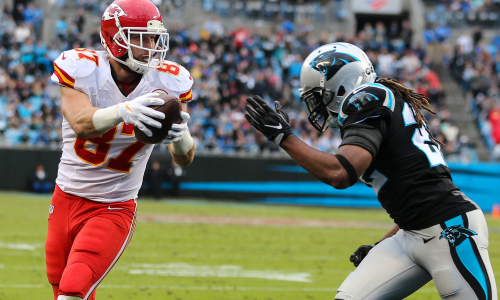 This Sunday the Carolina Panthers (3-5) head to Kansas City to take on the Chiefs (7-1) in a 1pm kickoff.

The Panthers enter the game after a disappointing 25-17 loss to a desperate Atlanta Falcons team. It was Carolina’s third straight loss, and they look to right the ship against the defending Super Bowl champions. One boost for the Panthers offense will be the return of RB Christian McCaffrey, who has missed the last 6 games. McCaffrey’s return will be a much needed addition to an offense that currently ranks 25th in the NFL in Points Per Game.

RB Mike Davis performed well in McCaffrey’s absence, but there is no doubt as to McCaffrey’s importance to this team. In just two games, he had four touchdowns, the same amount as Davis has in the 6 games since McCaffrey’s injury. Atlanta wideout Julio Jones had 7 catches for 137 yards, and the Falcons outgained the Panthers 401-304. The Falcons also dominated the time of possession battle 36:30-23:30. This was a bad loss anyway you look at it, and it wont get any easier for the Panthers.

Last Sunday the Chiefs blasted the lowly New York Jets 35-9 in a blowout. The Chiefs dominated from the start, as they outgained the Jets 496-221. QB Patrick Mahomes continued another stellar season as he went for 416 yards, 5 touchdowns, and 0 interceptions. Mahomes has only thrown 1 INT all year, and carries a 86.4 QBR into this Sunday’s matchup. TE Travis Kelce led KC in receiving yards as he had 109 yards and a touchdown on 8 catches. WRs Tyreek Hill (4 catches, 98 yards, 2 TD) and Mecole Hardman (7 catches, 96 yards, 1 TD), also had stellar days. Since their only loss to the Las Vegas Raiders, the Chiefs are averaging 34.6 PPG, and they will look to run it up against Carolina on Sunday.

This Chiefs offense is legit. They rank 2nd in PPG (31.6), 4th in total yards, 4th in passing yards, 3rd in passing tds, and 3rd in fewest turnovers. They have a stockpile of explosive options for Mahomes to use, and it seems as though every game it’s a different guy who shines. The addition of RB Le’Veon Bell will only continue to pay dividends and added another option to Mahomes’s arsenal of pass catchers.

Tyreek Hill has 35 catches on the season for 537 yards and 7 touchdowns (T-2nd in league). TE Travis Kelce leads all tight ends with 610 receiving yards, and 6 touchdowns on the season. Kelce also leads the Chiefs in targets, showing not just his ability to get open, but the incredible chemistry that he has developed with Mahomes. Perhaps overlooked, the Chiefs defense is also playing incredibly well this year. They are giving up only 19 PPG (3rd in NFL), and rank in the top 10 of the following categories: total yards allowed, turnovers forced, passing yards allowed, and passing touchdowns. While the Chiefs win because of their offense, they are the complete package because of their defense.

Panthers QB Teddy Bridgewater (184-257, 2106 yards, 9 TDs/6 INTs, 69.4 QBR) has been relying on WRs Robbie Anderson (51 catches, 688 yards, 1 TD) and DJ Moore (33 catches, 622 yards, 3 TDs) this season to help the passing game. While the addition of McCaffrey will clearly help their rushing game, the RB also demands the ball through the air as well. In the last two seasons, McCaffrey has had over 100 receptions and last year eclipsed the 1000 yard mark in both rushing and receiving yards. He is a weapon out of the backfield, and in his one full game this season he had 97 rushing yards, and 38 receiving yards. McCaffrey’s return will open up options for Anderson and Moore to get deep shots down the field as defenses will have to spotlight McCaffrey once again.

Currently DraftKings has the Chiefs (-10) as the favorite with the total set at 52.5. I think this number is high, and the spread is as well. Kansas City is 6-2 against the spread this year, and a lot of that has to do with their dominant defense.

I’m leaning towards a same game teaser here along with one player prop. Bump the spread down to KC -6.5 and then take the total to 59 and take the under. I don’t think this game is close, but by bumping down, you’ll save yourself in case of a backdoor cover by Carolina at the end of the game. I think McCaffrey will add some much needed energy to this Panthers offense, but the Chiefs defense is good, and should hold the Panthers to a relatively low score.

Along with the teaser, I’m taking the over on Travis Kelce 5.5 receptions. Kelce has had at least 5 receptions in 6 of 8 games, and despite a 2 game stretch with 5 and 3, he’s been hovering around 8 per game. Kelce is Mahomes’s number 1 option in the passing game and there’s no reason to think this stops against a dreadful Carolina pass defense.

In conclusion: KC-6.5/UNDER 59 Teaser and Travis Kelce OVER 5.5 Receptions.