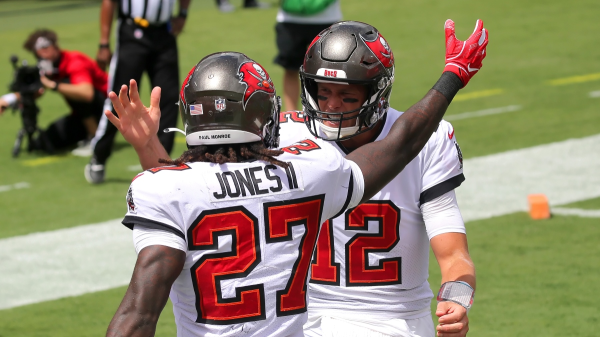 The NFL kicks off this Sunday with a divisional rivalry matchup, with the Tampa Bay Buccaneers (6-3) visiting the Carolina Panthers (3-6) at 1:00 pm ET.

The Buccaneers are looking to rebound from an embarrassing 38-3 loss to the Saints last Sunday night. In that contest, Tom Brady threw for just 209 yards, no touchdowns, and three interceptions. The defense, one of the best in the NFL, was not able to stop the Saints. Drew Brees completed 26 of 32 passes for 222 yards and 4 touchdowns and New Orleans rushed for 128 yards.

The Panthers are coming off a close loss to the defending Super Bowl champs, the Kansas City Chiefs. The offense played well led by Teddy Bridgewater (310 yards, two touchdowns) and Christian McCaffery (151 yards from scrimmage, one touchdown). Their defense however, had a lot of trouble slowing down Patrick Mahomes and the Chiefs offense. Mahomes threw for 372 yards and four touchdowns.

Betting Odds for Buccaneers vs Panthers

According to DraftKings, the Tampa Bay Buccaneers come in as 6-point road favorites and are available at -240 on the moneyline. The home-side Panthers are +205 on the moneyline and the total is currently a lofty 50.5.

On the defensive side of the ball, the Buccaneers have the edge. They hold an advantage in points allowed per game at 22.6, which is good for 9th in the league. The Panthers are a few spots down at 15th, giving up 25.1 points per game.

Since the Saints swept the Bucs this season, they must finish ahead of the Saints in the standings to win the division. After a game in which they lost by 35, Tom Brady will be looking to bounce back with a great game.

While the Bucs will be looking to have more balance in their game this week, the Bucs will look to attack the Panthers 20th ranked defense. On the season, Tom Brady has thrown for 2,398 yards, 20 touchdowns, and seven interceptions.

The Buccaneers have arguably the best receiving corps in the game today. Mike Evans leads the team with 34 catches, 437 yards, and seven touchdowns. Chris Godwin (28 catches, 320 yards, two touchdowns), Rob Gronkowski (27 catches, 323 yards, three touchdowns) and Scott Miller (26 catches, 410 yards, two touchdowns) have all provided great contributions. With the addition of Antonio Brown, Brady will have major weapons at his disposal to put up big points against a sub par defense.

On the ground, Ronald Jones has provided a solid running option for the Bucs, as he has rushed 120 times for 538 yards and four touchdowns. Leonard Fournette has also chipped in with 51 carries for 225 yards and two touchdowns.

Panthers trying to get back in the win column

The Panthers have not won a game since they beat the Falcons 23-16 in week five. The Panthers played great last game and came up just short. They just got Christian McCaffrey back after the star rusher returned after almost two months on the sideline. Until he gets fully healthy, the Panthers will have to rely on Teddy Bridgewater more to move the football and score points.

Bridgewater has played well this season, throwing for 2,416 yards, 11 touchdowns, and six interceptions. The Panthers will have to attack the Bucs 14th ranked pass defense, since their run defense is ranked as the best in the league.

Their receivers have provided good play this season led by Robby Anderson. He has caught 60 balls for 751 yards and one touchdown. D.J Moore (35 catches, 640 yards, and three touchdowns) and Curtis Samuel (38 catches, 367 yards, and two touchdowns) have also provided great contributions across the board.

Due to injuries to McCaffrey, Mike Davis is the Panthers leading rusher this year, having carried the ball 85 times for 353 yards and two touchdowns.

Take the Buccaneers to Win and Cover

This game should be interesting as both teams are coming off a loss. With the Bucs playing for the division crown, I expect them to cover the 6-point spread with little difficulty.