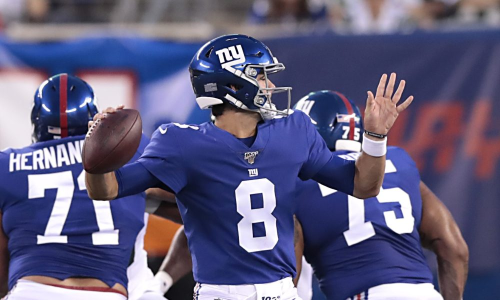 The surging Tampa Bay Buccaneers will be in the spotlight as they headline the Monday Night Football showcase against the New York Giants at MetLife stadium. The Bucs are coming off a big 45-20 win against the Raiders on Sunday night. The Giants, on the other hand, go into Monday’s duel on the back of a last gasp 22-21 loss against the Eagles.

The Giants (1-6) will be seeking to eke out a season rejuvenating win against the Bucs, who are huge favorites.

The Buccaneers are the huge favorites to win on Monday and are held at -500 at FanDuel and -530 at DraftKings. This means that their implied winning probability stands at 81.98%. A $500 wager for the Buccaneers with FanDuel sportsbook will thus earn you a cool $100. The Giants, the underdog going into Monday’s game, are held at +385 at Fan Duel and +400 at the DraftKings.

The Bucs are hot

The Buccaneers go into the Monday night after an emphatic 45-20 win away win against the Raiders last Sunday. Tampa Bay is flying high at the moment and will seek to build on this momentum going into Week 8. They are winners of their last two and are 5-2 on the season.

In the last two games, the Buccaneers have won by at least 25 points against relatively strong opposition, the Green Bay Packers and the Las Vegas Raiders. Their only losses this season has been against the New Orleans Saints (23-34) and the Chicago Bears (19-20).

Leading the Buccaneers last Sunday was Tom Brady, as the NFL veteran and legend is back to firing on all cylinders. He threw for 369 yards and 4 touchdowns against the Raiders and ran for another himself. His touchdown helped the Bucs get level with the Raiders early on and helped them gain some momentum. In his last 5 games, Brady has thrown just a single interception while tossing 15 TDs. He will be raring to go against a bad Giants defense on Sunday.

The Bucs defense has also been awesome going into week 8. They have restricted their last 3 opponents to 20 points or less. The Bucs defense leads the NFL in yards and rushing yards allowed. They were also able to neutralize the league’s hottest quarterbacks – Aaron Rodgers – just a few weeks ago.

Leading their defense has been Devin White, a second year inside linebacker. Against the Raiders, he had 11 tackles (has had 10 in at least four games this season) and forced multiple sacks.

The Giants will be looking to get their stuttering season up and running as they welcome the Bucs to MetLife. New York are huge underdogs (+650 at FanDuel), and no one should be surprised given their performances so far this season.

The Giants are averaging just 17.4 points, 282 yards, 24 points allowed per game, even though they’ve played several other struggling teams like the Eagles and Dallas Cowboys.

In their last game, a 22-21 loss to the Eagles, another struggling NFC East squad, they collapsed in the fourth quarter and gave up a 21-10 lead. Starting QB Daniel Jones threw for 187 yards for 2 touchdowns and one interception. An 80-yard scramble also infamously ended with him falling down, emblematic of the Giants’ struggles this season.

Without Saquon Barkley, out with an injury, the Giants’ offense has been very unproductive. They rank 31st in both yards (282.7 yards) and scoring per game (17.4 points) this season.

The pick: Tampa in a blowout

The Bucs are favorites on Monday night, and with good reason. Tom Brady is looking like his old seld, and the Bucs defense is solid, allowing the fewest yards and rushing yards in the league. The Giants have won only one game in seven outings and are short of confidence going into Monday’s game. Barkley is still out with an injury, and following their remarkable collapse against the Eagles, the Giants cannot be trusted to finish games, event home. Do not overthink this one. Tampa will win, and win big.