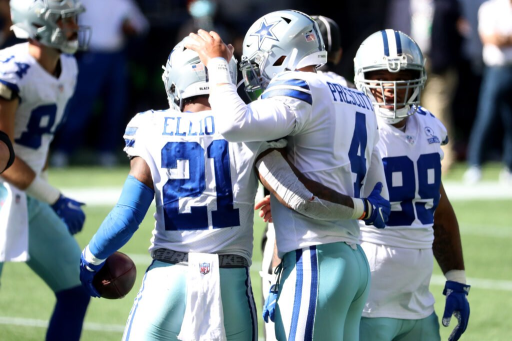 On a weekend full of matchups expected to be high scoring, Sunday’s game between the Dallas Cowboys and Cleveland Browns is a strong contender to be the highest-scoring of them all.

The Cowboys have only won one game but still find themselves tied for first place in the NFC East Division. Cleveland, on the other hand, has won two of its first three games and is looking up at undefeated Pittsburgh in the AFC North.

Kickoff is set for 1 p.m. ET Sunday at AT&T Stadium in Arlington, Texas.

Cleveland got the best of a back-and-forth game with Washington by winning the fourth quarter 17-0 on its way to a 34-20 victory. A rushing touchdown by Nick Chubb with about nine minutes left in the game pushed the Browns over the closing spread of -7.

The Cowboys rallied over a 15-minute period in the third and fourth quarters for a 31-30 lead with four minutes left in the game. The Seahawks, however, scored a touchdown with less than two minutes to go to win 38-31 and cover the spread of -5.5.

The line opened up at Dallas -5 Sunday night on DraftKings and FanDuel.

The Cowboys are -225 money line favorites at both books. The buyback on the Browns at both sites is +190.

None of the teams’ against the spread (ATS) trends are pretty, and as a result, do not fit well together.

Their over/under trends, on the other hand, do show that taking the over might be a good bet.

Lawrence suffered a knee injury in Week 2 and was less than 100% when he played in Week 3. He did not practice Thursday, but the team believes he has a good chance to play against the Browns.

Smith (neck) missed the last two games. He went through individual drills Wednesday and Thursday. Before that, he had not practiced since Sept. 17. There is optimism that he will play against Cleveland. Fellow offensive lineman La’el Collins remains out and is not expected to play on Sunday.

Browns WR Odell Beckham Jr. (back) is on the injury report, but does not seem to be in jeopardy of missing the game. Backup RB Kareem Hunt (groin), safety Ronnie Harrison (illness) and DE Adrian Clayborn (hip) did not practice Thursday. Their statuses for Sunday are not determined.

The Cowboys’ 1-2 record suggests they have underperformed to this point. The strength of schedule, however, has been difficult thanks to road games against the Rams and Seahawks.

The Browns are 2-1 and feeling good about themselves now that they have won two games in a row. The two teams (Cincinnati and Washington) they beat, though, are far from the same caliber as the teams the Cowboys have played.

In Week 1, the Browns never had a chance in a 38-6 loss to Baltimore – a team that boasts the type of explosive offense Cleveland will face this week in Dallas.

If Cleveland can control Sunday’s game with its running game, it has a chance to stay in it. If that plan gets off track even a little bit, Dak Prescott and the Cowboy are perfectly capable of opening up a lead that would force Cleveland to go deeper into its playbook.

The Browns haven’t shown yet they can do that, and there is good a chance that the Cowboys will pile up the points. They’re too good to lose to the Browns in what should be a bit of a desperation spot, trying keep their hopes alive for a great season. The 5 points are not too much to give either.

We recommend a play on the Cowboys -5, and maybe a look at the over as well.