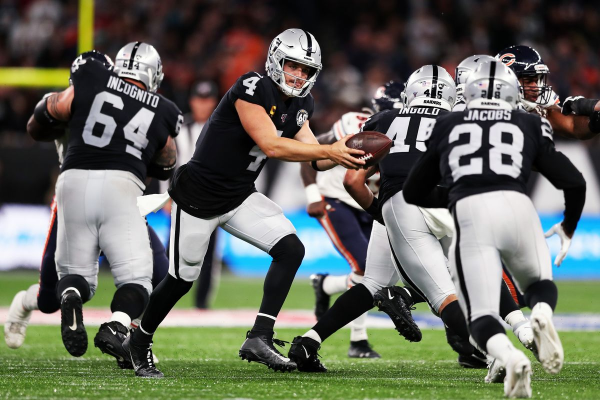 The rivalry that spans back 70 years to 1960 between the Denver Broncos (3-5) and the Las Vegas Raiders (5-3) unveils a new chapter as the two teams face off for the first time in Sin City. Kickoff is scheduled for Sunday @ 4:05 p.m. ET.

Denver is 3-2 in the last five games after starting the season 0-3. Drew Lock and the offense have shown to produce spurts of greatness, especially in the second half when they came back from 21 points down against the Chargers two weeks ago, and then almost came back from the same deficit last week against the Falcons.

The Raiders currently reside in second place of the AFC West behind Kansas City. Jon Gruden’s squad is the only team to knock off the defending Super Bowl Champions this year and have won three out of their last four games.

It will be the first meeting between the two teams since Week 17 of last season when the Broncos were able to knock down a pass from Derek Carr on a two-point conversion with zero seconds remaining and steal the 16-15 win.

The Raiders were the favorites in that matchup and are also the favorites for Sunday as DraftKings Sportsbook has Las Vegas at -4.0 point spread with a -200 money line.

The two second-round picks are being compared this year more times than not. Drew Lock is starting to settle into his position as the possible franchise quarterback for John Elway, but Derek Carr is trying to prove he is still the franchise guy now in his seventh season.

Carr has developed quite nicely under Jon Gruden’s offense as he recently racked up his sixth game of the year where his passer rating was above 100.0. He isn’t doing anything spectacular but is doing enough to win, especially by utilizing so many of his available offensive weapons. So far on the year, he has thrown touchdown passes to eight different targets and has only two interceptions.

On the other side, Drew Lock is improving week-by-week. The former Mizzou star struggled since coming back from a shoulder injury that sidelined him for a couple weeks, but finally has put up some solid numbers in the last two games. Against the Chargers and Falcons, Lock threw for a combined 561 yards, five TDs and two INTs. Prior to those two games, he had only 679 yards, one TD and four picks in four games.

The Rise of the Vegas’ Rushing Attack

Devontae Booker has been one of the biggest surprises for the Raiders this year. The former Bronco spent four years in the Mile High City serving as a backup before leaving and being picked up by Las Vegas this last offseason. In 2019, Booker had only two carries for nine yards; this year for Raiders, he already has 33 carries for 223 yards and a touchdown…already the best start to a season he’s ever had.

The addition of Booker has come to the relief of Josh Jacobs who struggled for a couple weeks to replicate his numbers from his rookie season. However, In the last two games, the former Alabama star has upped his game, rushing for 194 combined yards and a touchdown giving him 588 yards total on the year.

The Broncos have the second-most amount of dollars currently hanging out of their IR. Highlighted by stars like Von Miller, Jurrell Casey, and Courtland Sutton, Denver has 12 players worth over 60 million dollars on the IR which is behind only San Francisco.

The most recent addition to the list is rookie tight-end, Albert Okwuegbunam, who is the third rookie of the Broncos 10-man 2020 draft class to be put on the IR.

Last week against the Falcons, both of Vic Fangio’s starting corners were missing from action and Matt Ryan picked the backup secondary apart. The former MVP threw for 284 yards and three touchdowns. Thankfully, this week both A.J. Bouye and Bryce Callahan are on track to play on Sunday. Bouye has been on concussion protocol and Callahan was sidelined due to an ankle injury.

Besides the corners, the entire starting defensive line is either out for the year or dealing with COVID. Shelby Harris will miss his second-consecutive game after testing positive this week.

The Raiders are on the upward trend and seem to be clicking at the right time. Denver still has offensive issues to workout while their defense is on track to allow the most points in a season since 2010.

When you bet on this game, keep into consideration where these two teams are with their young talent. Las Vegas has had at least a year and a half to formulate a winning offense with all of their recent draft picks, while Denver has an immense talent pool but the team, as a whole, seems scrambled and can’t play a full four-quarter football game.

Because of that, I will be picking Las Vegas to take this one and maintain their prominent Wild Card position in the AFC standings.