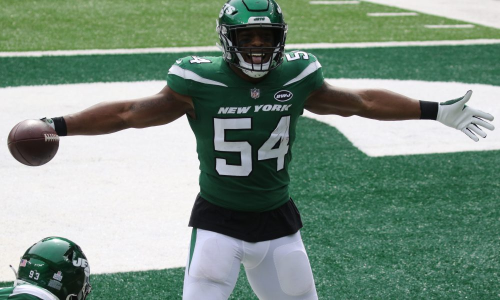 The Buffalo Bills visit the MetLife Stadium on Sunday 25th to face off with their AFC East division rivals the New York Jets. The Bills are coming off a 26-17 loss to the Kansas City Chiefs, the second of two losses on the trot.

The Jets have not fared any better and are coming into this match the worst of the two. They have lost all of their last 6 matches and are winless this season. Their last match coming into the Sunday afternoon matchup was a 24-0 drubbing by the Miami Dolphins at the Hard Rock Stadium.

Both teams will be seeking to quickly snap out of their losing streak in game week 7 an issue that makes this an interesting matchup.

The last four head-to-head matchups between the two teams have resulted in an average of 36.5 points. The bookies, however, have placed the totals for the over/under line at a generous 45.5. FanDuel is holding both the over and under at -110. Which one do you fancy?

For the spread, the Buffalo Bills, who are huge favorites in Sunday’s encounter are favored to cover the 13.5 points spread at -110 by both FanDuel and DraftKings.

The Jets will seek to win it at home

Despite the home advantage, the Jets come into week seven’s Matchday as major underdogs. They are winless in 3 at home and are winless since the season’s start in September.

The jets’ offense has been at its docile best in the last 6 matches. The 75 points they have scored this season rank last in the league. They are also the only team that is yet to tally at least 100 points by now.

Their defense is no good too. In the 6 games they have played this season, they have lost by a league-leading average of 18.3 points per game. With fans grumbling about the sustained mediocre performances, there is a real incentive to turn a new leaf on Sunday.

In their last game, a 24-0 shutout loss to the dolphins, the veteran quarterback started and threw for 186 yards. In his 2-game starting stint, The Jets have Just scored 10 points. Sam Darnold, a key person to the Jet’s side, returned to practice on Wednesday and may feature on Sunday. He has thrown for 792 yards, made 3 touchdowns and had 4 interceptions in his appearances this season. His presence will be pivotal in reenergizing the front line of an already depleted Jets team if he features this weekend.

The Bills need to get back to winning ways.

The Bills are highly fancied to win it comfortably at the Metlife Stadium. They will however have to get over their consecutive losses in their last games.

The Bills started the season with a 4-game winning run that was ended by the Titans earlier this month. Their last game, a 26-17 home loss to the Kansas City Chiefs, saw them slide downwards in the AFC ranking and now sit fifth in the league standing.

The two losses were also accompanied by their star quarterback, Josh Allen, decline in form. In his first 4 season games, Allen posted 12 touchdowns and gave out only a single interception. In his last two, he has given 3 interceptions and made only 4 touchdowns. With the Bills offense relying heavily on him, an improvement on his side will be a key determinant on how they will fare during Sunday’s game.

Going into this game, the Buffalo Bills are averaging 26 points per game for the season, however, on average this season, their opponents are outscoring them with 28 points. Their defense is also suspiciously leaky this season as they are giving up 397.2 yards per game while only averaging 318 yards themselves.

The Bills Will Win and Cover

The Jets have been playing awful this season, and the 6 blowout losses they have suffered is testament to this. The loss of Sam Darnold to injury has proven expensive and their stand-in, veteran quarterback Joe Flacco is yet to get going. Even with Darnold possibly featuring, it is difficult to root for a Jets team that is being outscored 30.8-12.5 points on average while giving up 387.2 yards to opponents this season. The Bills may have lost the last two, but we mustn’t forget that it was against quality opposition who are a combined 10-1 this season. Expect the Buffalo Bills to run out with it and cover the double-digit spread on the road on Sunday.