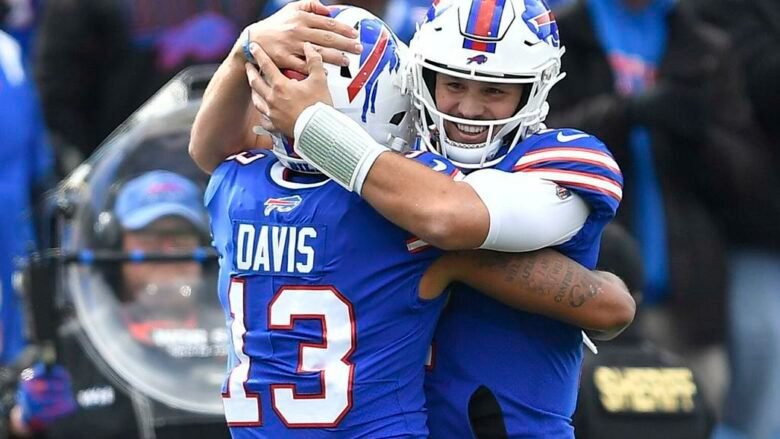 It may only be Week 6, but one of the most important games of the NFL season will take place on Sunday as Patrick Mahomes and the Kansas City Chiefs host Josh Allen and the Buffalo Bills.

If the Bills get the better of the Chiefs, the distance between themselves and the field and between Allen and the field will likely increase, while a win for Mahomes and the home team will tighten things up, at the very least.

Beyond the impact on the odds, the winner of this matchup will have the head-to-head tiebreaker.

That advantage is one that could prove to be very valuable come January. The Chiefs have hosted the AFC Championship Game a record four straight times, and a win on Sunday will significantly enhance their chances of extending that record.

In both of their first two home games this season, the Chiefs came back to win after trailing by double digits.

Then this past Monday night against the Raiders, they trailed 17-0 but rallied for a 30-29 win in a finish that featured two questionable–and unsuccessful–two-point conversion attempts.

That is not a position they will want to find themselves against the Bills, who won 38-20 in Kansas City in Week 5 last season.

They didn’t slow him down much in either meeting last season, but after getting torched for 374 total yards and four touchdowns in the regular season, they were able to win the meeting that mattered most in the postseason despite Allen’s 397 yards and four scores.

Allen’s only subpar performance as a passer thus far this season was against the Ravens in Week 4, and he offset that by rushing for 70 yards and a touchdown on 11 carries.

So, it is fair to say that the Chiefs will be up against a pretty stiff challenge.

However, the real key to the outcome in this matchup is whether or not the Chiefs can execute their ideal offensive gameplan.

It’s entirely possible that Mahomes goes out there and chucks it all over the field all afternoon and evening but having some semblance of balance has become increasingly more important for Kansas City.

A lack of balance hurt Kansas City in the Week 3 loss against the Colts, as they were held to just 58 rushing yards on 23 attempts (2.5 yards per attempt).

If they have to play from behind or can’t generate much on the ground, it could be a long day. More than the holes they found themselves in against the Chargers and Raiders, their struggles in Indianapolis foretell the frustrations they might face against Buffalo.

Ultimately, that is what tips the scales for me in this matchup.

Not being able to run the ball at least serviceably will hurt the Chiefs offensively and force their defense to be on the field far more than they would like to be.

Betting against Mahomes at home is something I’m not doing lightly, but I am backing Buffalo to leave Kansas City with an impressive and important win.